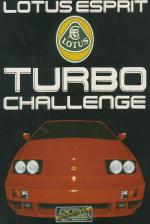 The only way of telling the cars apart is that the competitors cars are red, with a one or two on the bumper to show who's who. If you can't find a friend to fill the second car, the lower half of the screen shows the car in the pits (I thought Lotus's reliability problems had been solved!). In any case the tracks ahead provide plenty of challenge, with rocks in the road, slippery oil spills and water pools to slow you down. Longer races also require refuelling in the pits. The biggest challenge, though, is those crazy computer cars, 18 of them turboing about with many manically weaving across the road.

There are a total of 32 different worldwide tracks within the three skill levels: seven in easy, ten in medium, and fifteen in hard. In every race, points are awarded to the first ten drivers home - these are totallyed to determine the World Championship. As long as at least one human player finishes in the top ten, both players can carry on to the next race.

Players have a choice of automatic or manual gears, and two control methods - either pushing forward or holding down Fire to accelerate.

The 3D in Lotus is remarkably fast - especially considering the split-screen effect - and you really feel like you're bombing along at incredible speed. I also like the way the roads undulate realistically - it's an amazing feeling zooming up to the brow of a hill at full throttle, not knowing what hazards might await you on the other side! Both versions are technically impressive, with the more speed and cars than is believable. In fact, the C64 version is a little bit too fast - the cars are so big that you don't have much time to react as they zoom in off the horizon.

For both versions, the computer cars make things very tricky, homing in on you and requiring you to swerve quickly one way then the other to overtake. Later levels are even more tense with rocks and oil pools littering the road plus the need to stop and refuel. Although playing solo is fun, Lotus is really designed as a two-player game.

This is where the real excitement lies with each driver pushing the other to the limit, daring each other to take extra risks - especially with quick refuelling! At the same time, however, ensuring at least one of you gets into the top ten adds an intriguing twist on the otherwise highly competitive races.

This just has to be the fastest racer yet! The cars rocket along at exhilarating, arcade-standard speed. It's immense fun to weave through the pack, dodging past the slowcoaches, cursing the fellow driver as his Lotus overtakes you and then laughing as he comes to grief and you roar past.

This makes it instantly, compulsively addictive. However, there is a negative side: the graphic variety isn't extensive and with only fuel to worry about, strategy is rather limited.

Tunnels, weather conditions, worn tyres or at least different colour computer-controlled cars would have helped it dramatically. Lotus works brilliantly as a two-player game; on your own it loses quite a lot of its entertainment value.

It's technically excellent but in the gameplay stakes doesn't advance the racer idea an awful lot (Pitstop II has more depth).

As to differences between the two versions, like Phil I found the C64 game toughest, but both are technically stunning with all twenty cars appearing on-screen on the Amiga (twice over, in fact due to the splitscreen), and the C64 managing a respectable five or six cars per screen.

Presentation 74%
No intro, otherwise as with Amiga.

Graphics 93%
Amazingly fast, with swarms of cars on the road. Not much variety though.

Hookability 92%
Automatic gears make it quite easy to get into, while two-player gameplay is compulsive.

Graphics 92%
Beautifully detailed and extremely quick - faster than any other race game, and with two players! Cars are a bit dull, background graphics don't change dramatically but there's some spectacular hills.

Hookability 93%
Arcade speed and simple gameplay makes for rapid addiction. Utterly compulsive with some friends to compete with...

Lastability 83%
...and then there's 32 tracks, three skill levels and the manual gear changing to master. But game structure is simplistic for real long-term play.

Although playing solo is fun, Lotus is really designed as a two-player game. 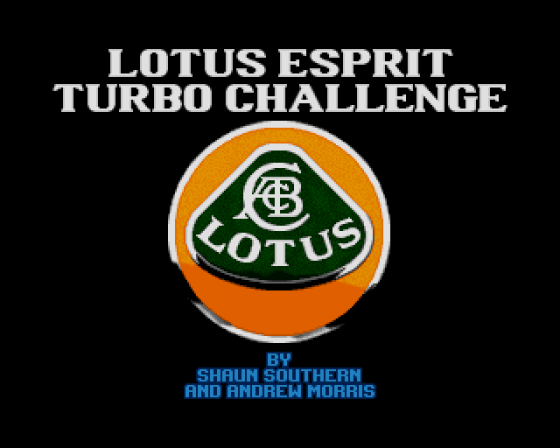 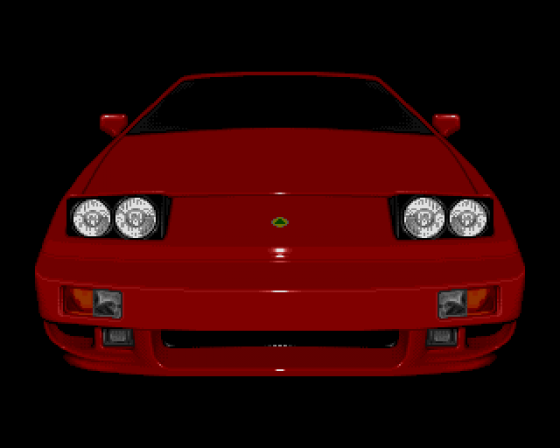 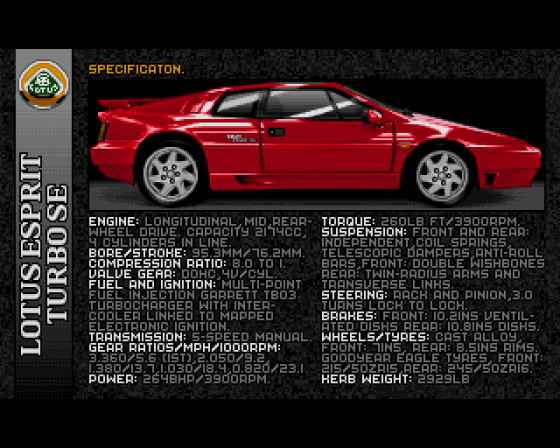 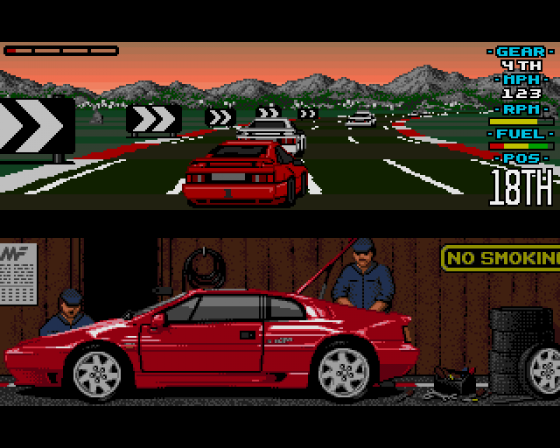 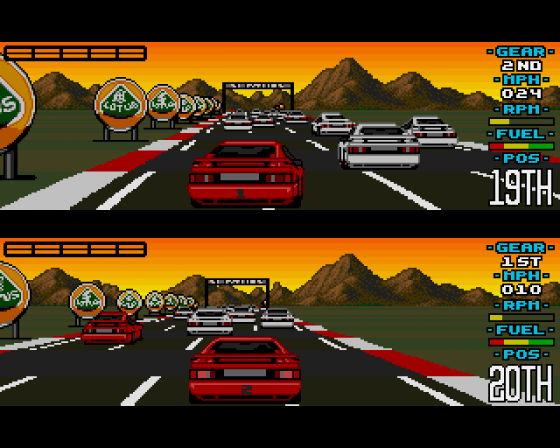 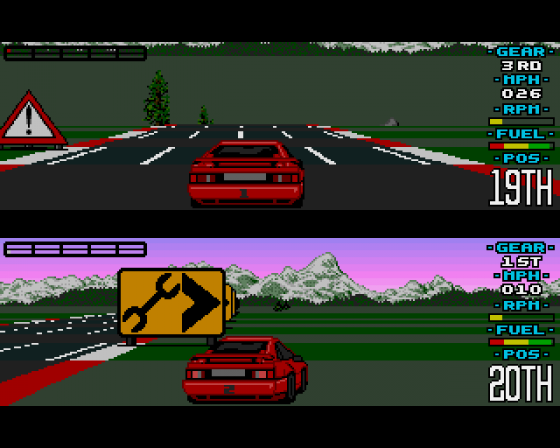 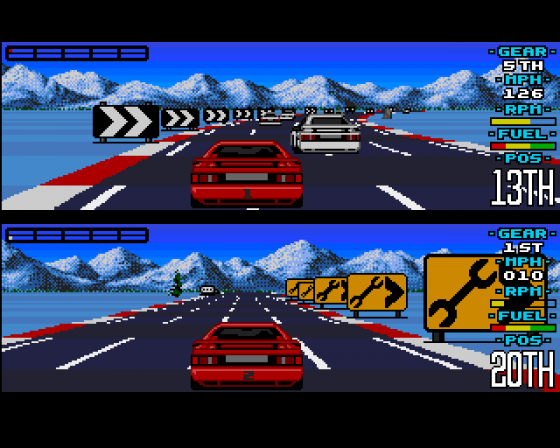 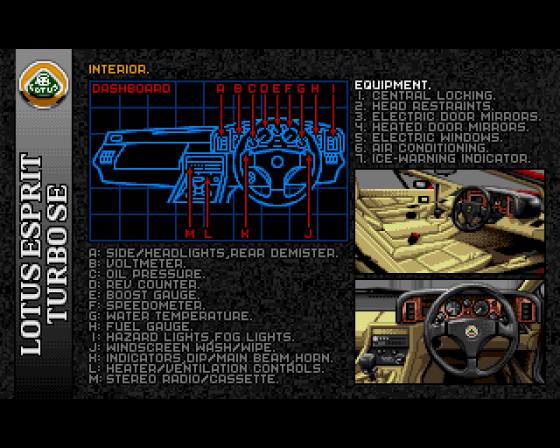