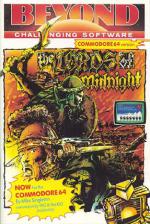 This game, released last year on the Spectrum, was heralded as the first 'epic' game - its size, complexity and originality certainly earn that title.

The program is a combination of adventure and war game. It is set in the land of Midnight, which offers no less than 4,000 locations in each of which you can see the 'view' in any of eight directions.

It is this innovative 'landscaping' feature and the highly original gameplay - you control several independent characters - which give the game its unique feel.

At the start of the quest there are four characters under your command, and as you explore you can recruit others. The action revolves around two main characters: Luxor and his son Morkin - they must eliminate the power of the evil Doomdark who is trying to control Midnight through his overpowering ice-fear and massive armies.

There are two ways to defeat Doomdark - Luxor can command the armies of the free to victory by seizing the Citadel of Ushgarak, or Morkin can destroy the source of Doomdark's power, the Ice crown at the Tower of Doom. The first is akin to a war game and the second more of an adventure.

You are defeated with the death of both Luxor and Morkin. However, the death of only one will still allow the other to try and complete his task.

When controlling the characters, you have four main choices as to what to do. You can VIEW the landscape surrounding you in eight compass directions, MOVE towards any of these unless something blocks your path, THINK - allows you to examine your character's state in more detail - or CHOOSE from a range of actions which varies according to your situation.

Usually the latter involves seeking information, recruiting men, hiding, or going into battle. The land is littered with mountains, citadels, forests, towers, keeps, and ten other types of features. At each of these you may find information, men or shelter, or even a more hostile reception.

Movement around Midnight is regulated by the passing of the days with your characters unable to move at night when Doomdark's forces are at large. Your progress is also affected by the terrain and the creatures that may block your path.

Other handy controls allow you to save the game, or even print a record of your progress. Because of the number of characters to control and the size of the land, these are much needed functions for very long games.

There is no sound but the graphics are exceptional with a marvellous animated loading sequence and the amazing panoramic views of Midnight as you play.

The Spectrum classic comes to the C64 with no noticeable differences, making me rather disappointed. I thought perhaps with the 64's vastly superior graphics capabilities, Beyond would have improved on the original pictures. Even so, this still is a classic adventure + strategy game, and will have 64 owners up until the dawn chorus.

This adventure strategy game certainly lives up to its 'epic' billing. The 32,000, or so, panoramic views are very impressive - a high standard of graphics and a strong atmosphere are maintained throughout. The lack of sound hardly detracts at all. Recruiting an army to aid the destruction of the ice crown is tough and, because of this, lasting interest is high. A must for adventurers and strategists alike.

This is truly an epic game which will rivet you to your keyboard through many long nights of play. The graphics are superb and the size and detail of the playing area stunning. Although you-know-what owners got it first, it is still a brilliant, indeed superior game on the 64. The combination of adventure and war game has been classically achieved, and we can look forward with eagerness to the rest of the trilogy.

Hookability 84%
The game's atmosphere and uniqueness make it very compelling.

Lastability 92%
A vast land to explore, an immense amount to do.

Value For Money 91%
Worth it if ever a game was.

Other Commodore 64 Game Reviews By BW