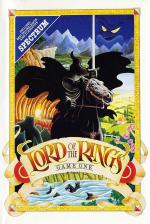 The magical ring of Sauron is in the possession of the Hobbit Bilbo, master of Bag End. Bilbo is ageing, and, becoming weary, decides to set off to visit the mountains for a long holiday, probably never to return.

The Ring is a source of evil power, sought by the Dark Lord of Mordor, and using it can turn its owner to evil. Before the Wizard Gandalf will let Bilbo leave, he persuades him to leave the ring in the keeping of Frodo, who is to be the new master at Bag End.

After some years, it becomes clear that the presence of the ring is a threat to the well-being of the Shire, and must be destroyed. But it is said that Rings of Power can only be melted by Dragon's Fire, and there is no Dragon's Fire hot enough to touch the one Ring of Sauron.

"There is only one way: to find the Cracks of Doom in the depth of Orodruin, the Fire-Mountain, and cast the ring in there..." Gandalf tells Frodo.

So Frodo sets off in the company of fellow-Hobbits Sam Gamgee and Pippin Took to dispose of the ring, yet afraid even to wear it, lest its evil powers corrupt him.

"You are in a comfortable burrow with a round window and a green door to the east..." So starts the first Lord Of The Rings adventure game, based on The Fellowship Of The Ring, first of Tolkien's famous trilogy.

The package from Melbourne House is a bulky one, comprising the paperback version of the book, plus two cassettes and an instruction booklet. The game is in two parts, one on each tape. On the reverse side of each is a 'beginners' version, a cut-down adventure in which the player takes the role of Frodo.

In the main game, the player can opt to play the part of any or all of the four main characters. During play, he can change his role to any one of the characters he has chosen, by entering:

"Become..." This is said to enable a number of people to play the game, each taking a separate character. So it does, but it does not enhance the game any more than if a group of people play together operating all characters. In fact, there is little need to swap between chraracters unless you decide to split the party up, since 'Inglish', that well-known Beam Software command language, accepts phrases like:

SAY TO SAM "GET BACKPACK"

The opening sequences of the game require the acquisition of suitable objects to prepare the party for the journey, and this is quite a long process, for there is a lot of stuff lying around the burrow.

When Frodo's inventory limit is hit, it is necessary to transfer equipment to another member of the party.

This involves a lot of either BECOMING or SAYING TO, and since backpacks are provided for putting things into, the whole business can become horribly involved unless the player keeps careful note of who is carrying and wearing what, and where everything is at any given time.

I accidentally had Pippin pick up two backpacks, and wrestled with the Spectrum for fifteen minutes before I could transfer one of them to Sam! After one of my more ambitious multi-command inputs, I received the following horrendous reply:

And of course, the more clever you try to become with the commands, the more likely you are to get a reply such as:

As all this takes a tremendously long time, it is highly recommended to save the game once you have got your party loaded up and out of the burrow. There can be sudden death lurking in the forest, and to be caught without a saved game, means you will have to reload initialising data, and go through the SAY TO SAM "GET BACKPACK AND GET MAP AND WEAR BACKPACK AND PUT MAP IN BACKPACK" routine all over again.

In issuing commands to different people in turn, it is possible for things to get a bit out of step, and there is nothing more calculated to frustrate the player struggling to get a grip on these mischievous Hobbits than: PIPPIN SAYS "ISN'T TRAVELLING FUN" in the middle of it all!

The game has an unusual screen layout. The text window is a slightly cut-down Spectrum screen, with a top border displaying a row of portraits of your selected characters.

The currently active character is named on the screen, and his portrait is shown in highlight. I discovered after reloading a game which I had saved as Sam, that I was listed as being Frodo, whose role I had taken in the game I QUIT. The top border was not updated until I BECAME somebody else.

Below the border is the text/graphic window, narrowed by three grey columns to the left, on which appear portraits of characters not present at the current location.

Whilst the program works out who is going where during a change in lockdown (everyone seems to follow everybody else) it clears and re-positions the portraits one at a time, resulting in a drastic increase in response time whilst faces flash off and on and flip from column to column.

The overall response time is disguised somewhat by a few seconds delay AFTER all the replies have been given, before input can be accepted, but in total runs at anything between 10 and 20 seconds when moving from place to place.

The text window sometimes has graphics in it - there are occasional pictures which scroll up to be replaced with text on hitting any key. They are not particularly artistic, and to me they represented merely another degradation of response time.

Below the text window is the command input area, and messages that are not part of the narrative, such as DON'T BE SILLY when you try something that isn't possible (although probably fairly sensible), appear here.

The trouble with this is, that some messages are too long for the three lines allocated, so the top half often scrolls out of sight under the text window before it can be read.

Key depressions cause a short bleep, which is particularly useful on the Spectrum, since it is so easy to press a key off-centre without noticing that it hasn't registered on the screen. Type-ahead of one character is possible, but this causes a problem, since the last character entered is the one that is displayed when that prompt finally arrives.

This is particularly annoying when using quotes. For some reason, there is a delay of about one second between issuing a quote, and its appearance on the screen. If you get into the rhythm of typing a sentence, it is all too easy to find you have the wrong letter following the opening quote. This makes SAYing TO rather irksome.

If the prospect of ploughing through the book seems a bit daunting, then, if you didn't see the film when it was shown on TV recently, you might consider watching the video, available from most good video libraries. This will put you on the right track, but to get the best enjoyment out of Lord Of The Rings adventure, you really should read the book, for then you will have a far better idea of what the game is all about, and how to react in certain situations.

This is an ambitious and slow adventure. Some messages are too long for the three lines allocated, so the top half often scrolls out of sight under the text window before it can be read.