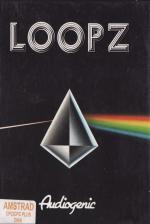 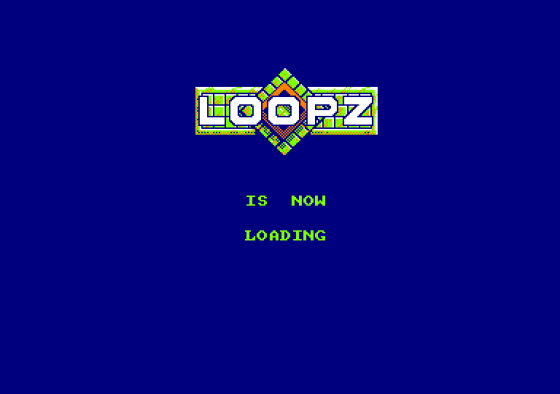 Ever tried eating a plateful of spaghetti with a knife? Loopz is something like that... well, sort of. Or maybe it's more like trying to do a jigsaw with oven gloves on...

Loopz owes a lot to that granddaddy of puzzle games Tetris, but instead of trying to slide blocks together to leave no gaps, you're joining them end to end. Your aim is to produce complete loops, which then obligingly disappear, leaving you space to start again. 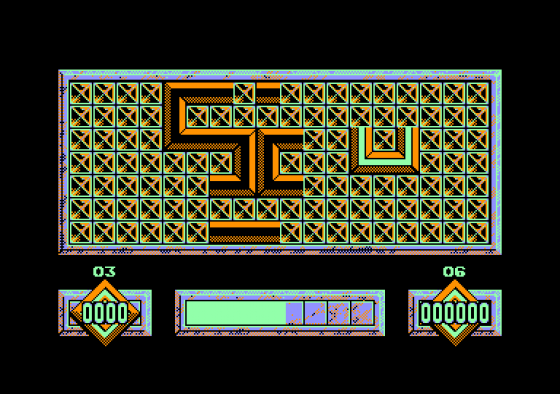 The pieces can be rotated, as they can in Tetris, and moved about your playing area at will. The control method is a bit odd though. Using a joystick, you have to press Fire and push right to rotate, and press Fire and left to drop a piece.

Your task might sound simple enough, but the time limit imposed on the placement of each piece tends to mess with your reactions, often causing you to drop a piece in exactly the wrong place. The pieces you really need never seem to show up when you want them to, and the screen soon fills up with potentially useless bits of spaghetti.

As frenetic as things get, there is usually a way to complete a loop, but actually spotting a possible success in a very busy screen is another matter entirely. The game has several skill levels, and three distinct game types. 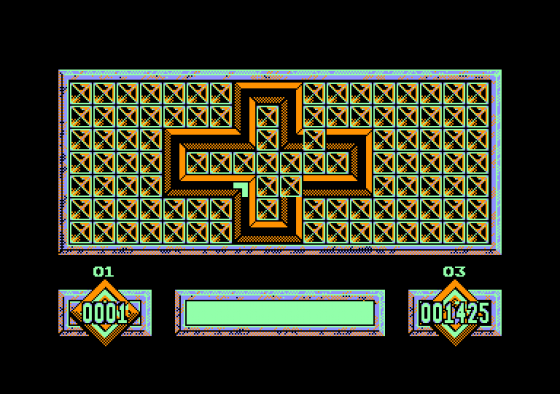 Game A is the simplest option - you simply keep going as long as possible, given that the playing area is slowly filling up with useless bits of loop and you start getting some very weird shapes... aaarrrggghhh! Best of all, though, is the simultaneous two-player mode where both players score independently and embark on a mad struggle to nick each other's loops.

Game B is similar, but now the time available for placing each piece diminishes every ten loops you make. In two-player mode, you each take it in turn to place the pieces. This time it's a co-operative business, so no lost friendships this time.

Game C is perhaps the most difficult. Loopz of varying shape and size are shown and then sections are highlighted and removed. You have to remember where you saw them placed, and when they reappear, try to place them in their original place... very Krypton Factor-ish.

The various skill levels and game types give this title a great deal of variety, and a genuinely lasting challenge.

The graphics are better than they really need to be, with a nice, marble-effect playing area. Control is pretty smooth and responsive once you get the hang of the quirky control method, although in simultaneous two-player mode things do slow down rather, adding to the general confusion. The game is accompanied by a haunting, atmospheric soundtrack, plus a few warning beeps when you get things wrong - try to land a piece so that the loop trails off the screen and it won't let you, emitting a warble just like the one at a Sainsburys check-out, when the barcode reader gets confused... Funny, that.

The presentation is good, but sheer playability is what makes Loopz shine. Cor, what a wheeze!

At first Loopz looks like a cross between Pipe Mania and Tetris. Play it for a while, though, and you find out it's got a style and addictiveness all its own. It's compulsive stuff, and once you start playing, you simply can't stop!

Graphics 75%
Well drawn, and more than adequate for this type of game.

Sonics 82%
A spooky tune plays throughout, and very good it is too.

Grab Factor 89%
Aack! So simple, and so addictive, you'll be hooked from the start.

Overall 87%
More fun than a guy should have - hours of puzzling mayhem.

More fun than a guy should have - hours of puzzling mayhem. 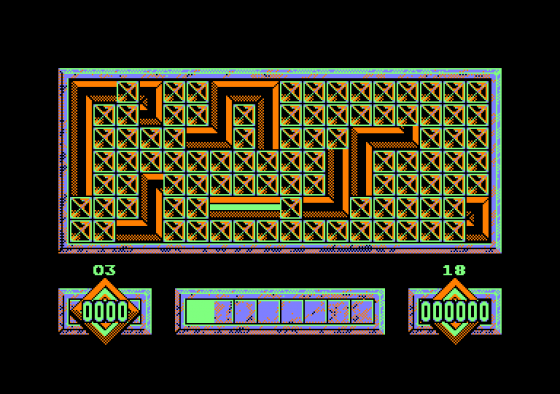