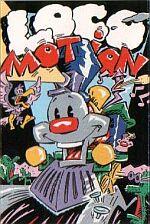 All aboard! It's time to get up steam, put your Casey Jones hat on, and head out into the wild west as the driver of the cannonball express.

You are given the choice of two games, the first involves making a voyage of discovery through the fifty screens of railway track, collecting gold, avoiding outlaws, and dodging the runaway trains. The controls are simple: forward, reverse and change the points. By carefully controlling your speed you can pick up trucks. A variety of items can be found in these: cattle, bridge parts or, best of all, gold. Points are awarded for delivering these gold trucks to the bank, assuming you can find the bank!

In the second type of game you are at the helm of a runaway train tearing through the wild west at full speed. Unfortunately this version of the game soon became a little tedious as all you controlled was the points lever.

Overall I enjoyed the program, it was an opportunity to play a nice sedate game for a change, with not a laser in sight.

Other BBC/Electron Game Reviews By J.C.

I enjoyed the program... A nice sedate game for a change, with not a laser in sight.