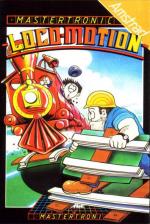 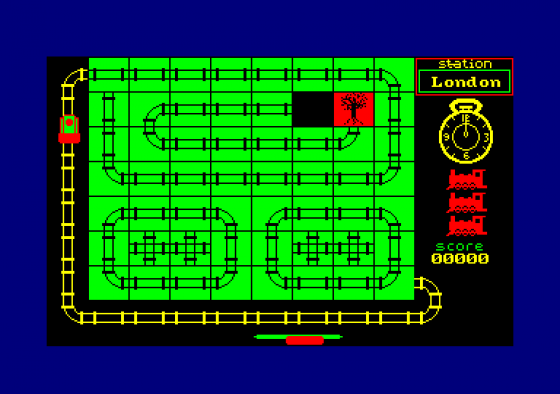 Based on the obscure arcade game Guttang Gottong and similar to Confuzion, this puzzle game sets you a diabolical task on ten screens. You have to guide a train to its destination along a track without letting it run into a dead end.

Each screen is composed of a grid of squares on which are drawn lengths of railway track. A train starts at the base of the screen and chugs its way up the left hand side until it enters the grid at the top left. Your job is to get it to the bottom right of the grid where it can get back to the station again.

You have to move the track sections into position by shifting them around using a single space, much as in a letter square puzzle. The sections come in several squares with curves, straights (vertical and horizontal) and crossroads. These have to be made into one continuous track which can be as long or as short as you like, as long at it doesn't have any dead ends and leads to the exit track.

The layout of each of the ten screens is always the same but sometimes blocks may appear with an impassable hazard on them. Rocks, trees and people can all block the track and if they form part of your usual route it will force you to act fast. Bonuses in the form of coal or water may also crop up and if you can get the train to pass through them you can pick up handy points.

As the train passes along the track it turns squares yellow for which you score points. However, you still may have time to move them so that the train can pass over them again. If the train gets to its destination then you score more points as each of the squares you passed through is counted off.

If you get in desperate trouble, you can halt the train for one minute while you shift blocks. The problem is that the clock doesn't reset for each track, but only when you lose a life. This happens whenever you hit a dead end, be it block or the edge of the grid. Up to four players can take part but going number four does give you an advantage.

1. Tough puzzling action. 2. Great screen designs. 3. Enough time to think but little enough to keep you under pressure. 4. Plenty of layouts to keep you going.

This game railroads you into addiction. It's neither original nor sophisticated, which is perhaps why few people can resist its appeal. Once you sit down to a game you don't pay much attention to the outside world. Frenetic and exciting.

Frenetic and exciting... Few people can resist its appeal... Next stop - addiction!