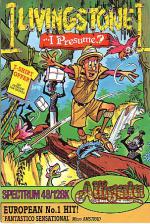 Back to Victorian days when the Queen never smiled and Stanley had lost Livingstone.

In an attempt to discover him Stanley sets out into 63 flick screens of the African jungle after the good doctor. Moving left, right, ducking and jumping from platform to platform, Stanley ' s task is to solve problems, for instance, switches open barriers, but cannot obviously be reached. Hidden exits once discovered allow him to move on to the next level.

Diminishing energy can be replenished in time-honoured tradition by picking up the food and drink he finds on his travels. Zero energy causes the unsung explorer to lose one of his lives.

On his quest our hero must battle past, or avoid a crop of man-eating plants, slithering snakes, dart-puffing pygmies, watching eyes, coconut-chucking monkies, quicksands, bullets, canibals, alligators, scorpions and tumbles into deep mine workings. Should he fall foul of any of these a life is lost. As an added problem Stanley finds that a flapping sea eagle is out to get him.

For protection and help the intrepid Victorian carries a boomerang, daggers, and grenades, which must be used with care if he is not to self-destruct. Additionally he owns a vaulting pole to help him reach higher platforms. The strength with which weapons can be hurled or vaults made is regulated using Space, and an illuminated icon at the base of the screen informs of the object currently held.

Points are awarded for despatched attackers, but jungle life can be tedious, so watch out for five gems which may lie in strange places such as birds' nests; only when all of these have been collected is there any chance of passing the secret temple.

'The ideas within Livingstone are an enjoyable combination of old and new - it takes the platform game a bit further with the addition of four different weapons. Most screens present a 'Now, how do I get out of that?' problem, but they aren't frustrating, and can be most rewarding when completed. The graphics appear to suit the action well and generally it adds up to a pleasant little game that should keep a good chunk of spectrum owners amused for some time.'

I haven't seen a game in this genre for ages - it certainly makes a change from all the usual stuff and no mistake. The plot's fairly simple once the phrase book English on the inlay has been deciphered (Livingstone is originally a Spanish game), as is the gameplay once you've worked out the behaviour of your weapons.

The presentation, graphics and sound are all well above average so this isn't a bad buy at all, although I'm not too sure it will keep most people playing for very long.

What a pleasant surprise Livingstone is. The graphics totally suit the scenario, and there are many different colours and some very attractive bits of animation. The screen is set out superbly - you would expect loads of colour clashes, but in fact they're disguised very well. The equipment that you carry and the foreigners that you meet create the perfect atmosphere - I especially liked the piranhas that jump out of the river. This game has so much content and it's sheer fun.

This game has so much content and it's sheer fun.. The equipment that you carry and the foreigners that you meet create the perfect atmosphere - I especially liked the piranhas that jump out of the river.