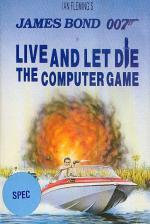 No, I'm not going to make all the obvious statements or remarks, such as isn't it interesting how this game looks remarkably like a game called Aquablaster that I saw a while ago, or how come that such an old film is only being licensed now or [OK, we get the message! - Ed].

No prizes for guessing that Live And Let Die places you in the role of James Bond in one of the most exciting sequences in the film, the death-defying speedboat chase along the winding rivers of, er, well somewhere in America. Viewed in much the same way as OutRun/Roadblasters/almost any other racing game, except that this time it's on water. In fact, this game reminds me of nothing so much as Buggy Boy, complete with gates, underground tunnels and banks on either side of the road that you can drive up to avoid any mines that might just be floating in the water.

Mines are only part of the trouble, however. For the first part you've got to remember that you've only got a very narrow river to ride on, so you've got to try and plan evasive action very carefully, as too many times you go left around an obstacle when you should have gone right and find yourself against a group of mines that you can only get around on the right side and boom!

Enemy boats are also racing up and down the waterways, and it's there that drop the mines. It would be nicer if they dropped them neatly in a line, but oh no, they zig-zag across the river, and it does get amazingly difficult to get around them. Loch gates bar your way at various stages along the rivers (yes, rivers, you get a choice of five at the start of the game) and these need to be shot down with a missile. Unfortunately, you only get three, and you tend to get four gates. And, if all that ain't enough, you have the normal Roadblasters cannons at either side of the riverbed.

So, with all this being thrown at you, what have you got on your side? Well, you've got your handy cannon, along with the three missiles. Also, you find at places along the river logs which when run over catapult you into the air and over obstacles. There are fuel cans (which look amazingly like logs) which give you back some fuel. Should you run out of fuel, it's game over.

The graphics are large and well aniamted on the Spectrum though, as usual, monochrome. The explosion of the main character is quite nice. The 3D update of the approaching objects is well done, too.

It plays well, with quite a fast joystick response, but I did find the firing a little sticky. It's not too difficult, but it's no walkover either. There's enough there to keep even the most seasoned arcadester playing for a while.

There's enough here to keep even the most seasoned arcadester playing for a while.