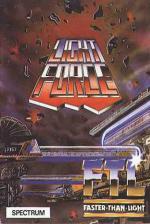 This is the first release from the shoot-'em-up arm of Gargoyle Games - Faster Than Light. If you have been in the business for a while you will know that Gargoyle started with a zap game. They then went on to produce Tir Na Nog, Marsport, and the like. Not wishing to tarnish their new mage, their latest range of zap games is being released under the new title.

Light Force started out as a new idea for handling colour on a Spectrum. This gives you some nice graphics without all the grotesque colour clashing that goes on whenever anybody tries to use any sort of colour on a Spectrum screen. The resulting effect is quite good on the Spectrum, but the effect doesn't carry across to the Amstrad and Commodore with the same kind of impact. This is because games on these machines usually are fairly colourful with no problems.

The game itself is very good. You fly your ship across various space and planetary surfaces, with patterns of evil nasties flying around the screen. In addition there are various ground targets that have to be knocked out.

The game is very well presented. The graphics are well thought out, and there is a logical difficulty progression from level to level. In all, this is a well thought out game which is a definitive representation of the genre.

A well thought out game which is a definitive representation of the genre.