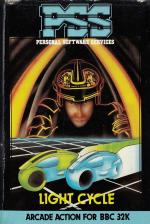 Light Cycle is a futuristic version of the old game Surround, where you create an ever-lengthening wall in an attempt to trap the computer into crashing its wall into yours, or forcing it to move off the edge of the play area.

The PSS program had not added much to this old plot, and I found the graphics a little disappointing. There was nothing faintly resembling a cycle in the screen display, just thin lines described as laser trails.

On the plus side, the sound effects were excellent, true arcade quality. Nice crunching noises for the explosions were coupled with rippling colours in the screen border. Quite a lot of skill is needed to beat the computer even when the game is set on its lowest level.

Perhaps computer buffs who don't remember Surround would enjoy whiling away a few hours with Light Cycle, but those of us who do remember, might feel that more could have been done graphically to breathe new life into this old classic.

Other BBC Model B Game Reviews By N.W.

A lot of skill is needed to beat the computer even when the game is set on its lowest level.