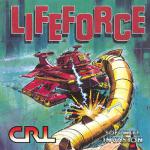 An early transport project involved the production of nuclear-fuelled Flexible Robot Caterpillars (FRC's) cpable of moving people and heavy loads. Radical changes in Government saw the FRC project take on an increasingly military role. All went well until the FRCs malfunctioned and overran the capital.

Project 'Lifeforce' aims to recapture the city by sending a one-manned tank to destroy the FRCs and collect the valuable fuel rods from their nuclear reactors.

The fuel rods are stored in the FRC's heads, which are stopped by successively destroying the individual sections of their bodies. The remaining head unit becomes immobile, and the rod is picked up when driven over. When all eight fuel rods are safely stored aboard the tank, the player exits to the next, more difficult, level.

A variety of alien species inhabit the now-deserted city, which are blasted or avoided, since prolonged contact is detrimental to the tank's shields, finally resulting in its destruction.

The tank boasts an impressive armoury, including lasers, heat-seeking missiles and smart bombs. Both the power cells for the shields and lasers plus the separate armaments are located within small rooms around the cityscape. These are collected by blasting the retaining walls and simply driving over the cannisters in question.

There are eight FRCs located around three parts of the city, and when all are destroyed, the mission is complete.

Lifeforce is nothing technically impressive, having distinctly average graphics and sound, but it is attractive for its unusual adversaries, and the seek-and-pick-up weapon system.

This helps sustain the action as it requires continual attention to ensure weapons remain armed and working. However, the game is by no means a polished product and struggles to maintain interest over a long period - the creature you're trying to track down only appears on screen briefly and in between times the action is laboured.

Not a wonderful game by any means, but there have been worse.

Although Lifeforce is played at a rather plodding rate and isn't particularly polished, it manages to offer some entertainment. The bas-relief graphics backdrops are effective, but they're marred by the very jerky scrolling and a pretty poor-looking bunch of adversaries.

Quite a bit of strategy is required to make safe passage through the city, and I don't think a little cartography would go amiss. If you enjoy blasting games which require thought as well as a fast trigger finger, Lifeforce could provide some, albeit limited, enjoyment.

By all accounts, I shouldn't like Lifeforce. The scrolling is poor, the control is awkward and often fiddly and the tank is slow. Moving through the rubble of blasted walls sometimes proves difficult, and it's possible to get the tank momentarily 'trapped' due to the poor collision detection.

This becomes really frustrating while under attack from aliens at the same time! Despite all this, I still found myself wanting to play. The radar provides a good source of tension, because if you don't constantly watch for the FRC's, one of them comes whizzing around the corner straight into you, ending the game, and blasting the swift-moving caterpillars is quite entertaining.

Lasting appeal may not be all that hot, but Lifeforce provides a reasonably worthwhile blast.

Lastability 44%
If you like the action, there are three tough levels to complete.

A reasonably enjoyable blast and collect game with three levels to complete.