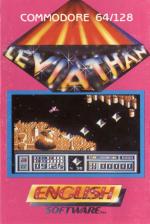 Inspiration or games come from many sources: from films, TV programmes, books, even dreams. Inspiration or this one came when English software boss, Philip Morris was watching a ZZ Top video!

But it doesn't feature hordes of scantily clad women or a big red car, instead it's a variant of Zaxxon.

The video in question is Rough Boy, in which a red car escapes from a giant wheel by flipping into hyperspace!! From that came the idea for Zaxxon, which features a ship that flips every which way - forwards, backwards, dives, climbs, flies left and right and rolls too.

The object of Leviathan is to wipe out alien hordes in three different landscape zones. Unfortunately, this isn't as easy as it sounds. Leviathan is an extremely difficult game - it must be, you get five lives!

The screen display features a Zaxxon-style diagonally scrolling game screen on top of an instrument bar that displays fuel gauge, number of remaining aliens, latitude, score, bombs remaining, ships and time. The mission must be completed within a time limit that decreases as you progress through the levels. Run out of time and you run out of game.

Leviathan is more than just a difficult version of Zaxxon, however. Its success lies in its landscapes: there are three and you must complete the levels contained in all three to finish the game. You can attempt them in any order and swap between them.

Each landscape has different challenges; these include 3D objects that stand in your way, and land-based enemies that try to gun you down - high tech laser firing gun towers and aerial dishes lurk in the city and lunar landscapes, while an incredible dart-firing giant statue features in the Greek landscape.

You must battle a bewildering array of aliens before time and fuel run out. You can get more fuel in the city by landing on fuel depots marked with giant arrows or by destroying revolving fuel cubes.

If things get desperate you can use one of your three bombs to clear the screen of aliens or the Zaxxon-type ships.

The action is accompanied by a background hum that changes to a high-pitched whine whenever the aliens close in. This game isn't going to get too many points for originality but it does illustrate how a classic game can be successfully reworked to produce a second excellent game.

This game isn't going to get too many points for originality but it does illustrate how a classic game can be successfully reworked to produce a second excellent game.