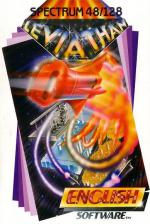 Ripping through space in your fighter craft, you pass over three different panoramas - Moonscape. Cityscape and Greekscape - which float through the silent darkness on platforms of land. task: to rid each territory of the entities which infest it. (There' s a time limit, of course.)

You can control your fighter's direction and attitude, negotiating the lunar domes, towers, radar devices, Greek statues and skyscrapers that project from each landscape's surface. Contact with any of these wipes out one of your four lives.

The fighter is equipped with limitless missiles, and three smart bombs which can take out any alien in the vicinity. For each alien destroyed, points are awarded, with an extra life earned for every 5,000 points.

Read-outs give the number of aliens remaining in a sector, the number left in the current attacking wave, and their type. All aliens are lethal when touched - but prompt evasive action can be taken by flipping the craft onto its back and reversing direction.

Your craft has a limited supply of fuel; it can fill up by shooting approaching fuel cubes in the space zones of each planetscape, or by landing on fuel-pod arrows in the Cityscape sector. Sound effects warn you when the craft needs a top-up.

According to the inlay, Leviathan was inspired by the ZZ Top video Rough Boy, which is set in a spaceship.

'Leviathan isn't amazingly exciting, and the loading sysetem nearly always goes wrong! The background graphics are well-detailed, but when your ship flies over them you can't see where it 's gone - a serious problem.'

'As shoot-'em-ups go, this is a dead loss. The screen is very cluttered, so you can't really tell where your craft is (it's the same colour as everything else) or what's going on. The control method is unwieldy, and a lot of problems occur because the accelerate/decelerate controls are on the same keys as the up/down controls. I can't recommend Leviathan. It offers no challenge, because of its bad implementation - though it could have been the best Zaxxon lookalike yet.'

The graphics unquestionably the drawing point of Leviathan. The scrolling is very fast, and the landscapes are detailed, with good perspective. The trouble is, they suffer from the same problem as Slap Fight (page 20 this Issue) - you usually can't see where or what the baddies are, because of the amount of detail. And as far as I can see Leviathan has nothing to do with ZZ Top. But it's the best Zaxxon-type game on the Spectrum; the competition is very dated. If you can overcome the playability problems, there's an addictive game here.'

The best "Zaxxon-type" game on the Spectrum; the competition is very dated. If you can overcome the playability problems, there's an addictive game here.