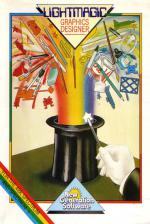 A very simple program to write on the Spectrum is an art utility: line drawing, colours, UOG designing and so on. Loads of these appeared soon after its launch, and eventually Melbourne Draw and Paintbox became established. Strange then that three years later, on a machine with limited resolution and pathetic attributes, two new products have appeared from well-respected software houses.

Both programs offer certain basic facilities: etch-a-sketch type drawing, circles, filling and magnify being the most obvious. But handling and details are very different.

Leonardo offers more commands - in fact, a bewildering variety that requires two keyboard layouts to show them all! It comes with an equally confusing and sizeable manual. The programming is mostly BASIC, and the main fault is a deathly slow cursor speed. Line drawing is strangely complex, and the whole process takes ages. The program is generally user unfriendly, which is a shame, because it offers a lot of useful features: ellipses, arcs, clever shading functions and a scroll feature. The problem is, with so many features, it takes five minutes to find the right key for the function you want.

Leonardo offers no UOG designer as such. Instead UOGs are copied from the normal picture screen, and thus have to be designed actual size; a bit fiddly. However, combined with Leonardo's excellent user programs, whole areas of screen can be copied into a bank of up to 790 characters, so large sprites can be created and used in games. The user program also offers storage and recalls of whole screens, which can be divided up by the user in his programs as he wishes -particularly good for adventures, animation or platform style screens.

Light Magic is machine code, and the cursor glides effortlessly around at a user chosen speed. The baffling number of keys in Leonardo does not occur here, prevented by using various menus and modes.

The main option is screen editor, which presents a blank screen for design. Pressing 'enter' changes modes. Pen mode allows etch-a-sketch style drawing, plus a wonderful feature called 'band' which draws a line, moving quickly on screen, between the cursor and the last set point. The fact that it is moving means angles and slopes are easily set.

Brush mode allows 20 sizes, and \0 types of brush, including an air brush simulator. Block mode allows you to cut areas from the screen and move them smoothly around. Text allows normal or double sized writing with ease, and UOG mode is the same using characters from six selectable banks. Although many of these features are available in Leonardo, here they are much more user friendly. UOGs can be designed in a separate part of the program which presents an 8 x 8 grid, like good old 'Horizons', but naturally more sophisticated.

Light Magic is easy and fun to use, and with the brush and band facility it allows more artistic freedom. Leonardo is slower, but technically more proficient and useful - if you can plough through the manual. Certainly the user program is excellent, and it costs half as much.

Light Magic is easy and fun to use... The brush and band facility gives artistic freedom... The cursor glides effortlessly around.