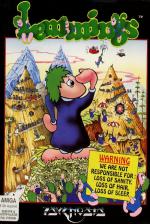 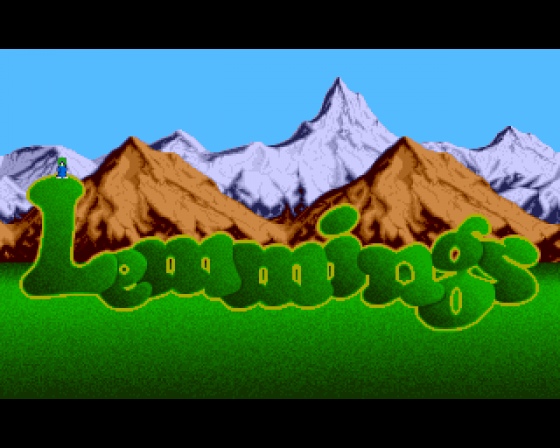 Lemmings are those notorious vole-like rodents whose holiday planning leaves so much to be desired, cheerily toppling over the edge of cliffs on their lunatic migratory jaunts. It's not as if they're suicidal, they're just too dopey to notice imminent death staring them in the face. Now you've been given control of a whole bunch of lemmings, dozens and dozens of the little blighters deperate to get away from it all. Fortunately, you have been given god-like powers to smarten some of them up...

In each of the 140 screens there's a start point where the dumb but cure critters are dropped, and an exit. The aim of the game is to guide the lemmings from one to the other without them being burnt up, drowned, crushed, splattered, hung or simply lost in the wilderness when time runs out. This is no easy task as your basic lemming will continue walking straight on untilsome hazard extinguishes his little life. To stop this you need your smart lemmings.

To smarten a lemming up you simply click on the skill you want, then move the cursor over to the right lemming and press Fire. You've now got a smart lemming, well sort of. The most basic kind of lemming is a Blocker which stands with its arms outstretched stopping anyone getting past. 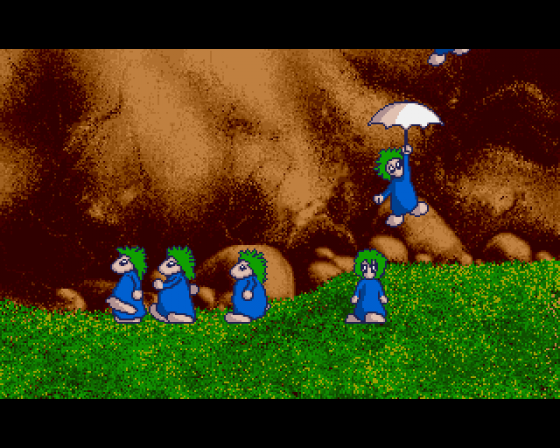 Obviously by using two you can contain the dumb lemmings indefinitely. Normally you'll do this after letting a few lemmings go ahead to start preparing a safe route. These trailblazers can be turned into Climbers which can clamber up vertical surfaces, and Floaters which survive big drops by using parachutes.

There are also Builders which construct bridges, but they only work for a set period marching onwards (even if it's into a bottomless abyss). Fortunately, you can keep them working if you click on them as soon as they hold up their hands. If you can't go over an obstacle you might want to cut through it: there are three different types of Diggers - ones that go straight down, straight across and diagonally down. All the skills are limited though, so be careful to use them wisely.

Once you have a pathway cleared, you can get rid of those Blockers. Sadly, these 'brainy' lemmings aren't start enough to be re-educated so you have to blow them up! Click on them, or any other lemming which has irritated you, and a five-second countdown appears over its head. At zero, they shake their heads before exploding, blowing away quite a bit of the scenery too. 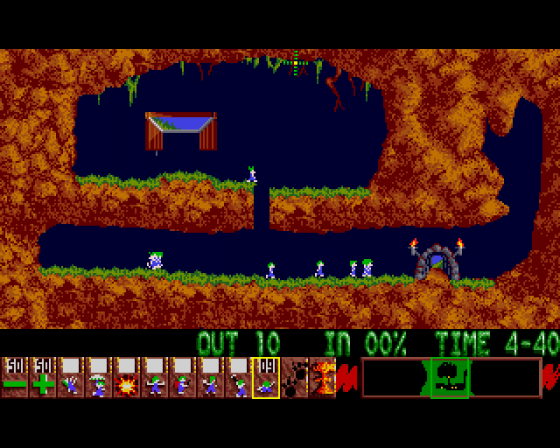 Occasionally exploding a lemming is cital for clearing away a small obstacle - you have to be cruel to be kind in this game!

On each level there's a time limit and a percentage target - fail to rescue the required number of lemmings and it's end game time. You can also quit a level by clicking on apocalypse, which explodes all the lemmings - useful if everyone's got helplessly trapped. When you do die you're given the option of continuing - a password system ensures you never have to play a completed level again.

There are four skill levels to the game (Fun, Tricky, Taxing and Mayhem), each with thirty levels - you can choose to play any at the start. There's also a two-player mode with twenty screens: each player has his own exit but the lemmings are so dumb they'll walk through any exit. At the end of the level, the player with the most lemmings wins, and saved lemmings are added to the number released on the next level. The two-player mode has a split-screen and the potential for mixing your lemmings in with your opponent's gives plenty of opportunity for sabotage! 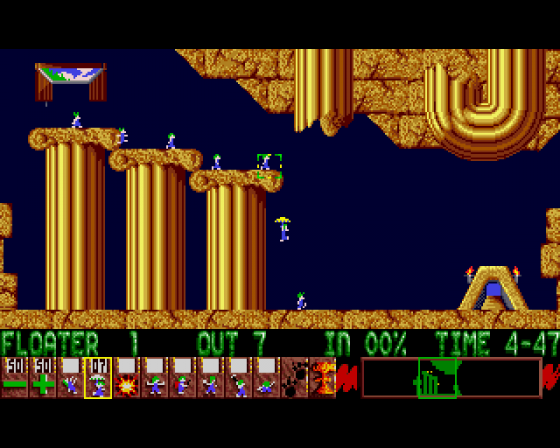 A C64 version is almost certain.

Lemmings is the epitome of the thoughtful, imaginative programs that people so often claim "aren't made anymore". Surprisingly enough Psygnosis, the masters of graphical glitz, have proven the falseness of that argument by resisting the temptation to slip in even a single layer of parallax scroll, instead focusing on the brilliantly original gameplay.

As with Loderunner and Boulderdash it's different enough to keep you hooked for ages, yet also instantly and compulsively playable. The tiny lemming sprites have bags of character, with some superb animation, and it's great fun trying to save them - or simply leading them into dramatic catastrophe! 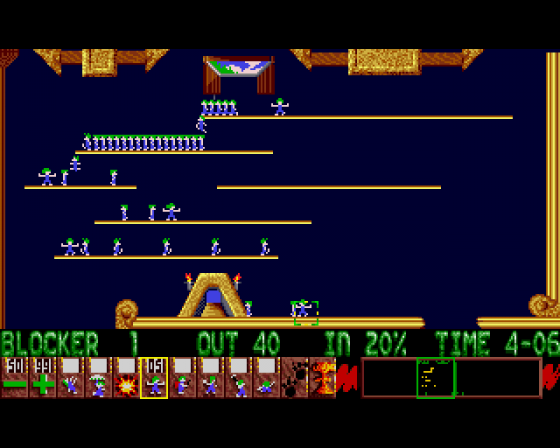 The explosive 'apocalypse' option is always worth watching. The violent element, combined with the lemming's irresistible cuteness, should ensure the thoughtful and varied action achieves the commercial success it richly deserves.

This has to be one of the best original game ideas in a very long time. But it's really two games in one, the one- and two-player games are so different.

Playing solo involves much hard thinking to work out a safe route, with each screen a massive puzzle in its own right. Later levels are made even trickier with tighter time limits, higher rescue quotas, and the absence of blockers and other useful abilities. 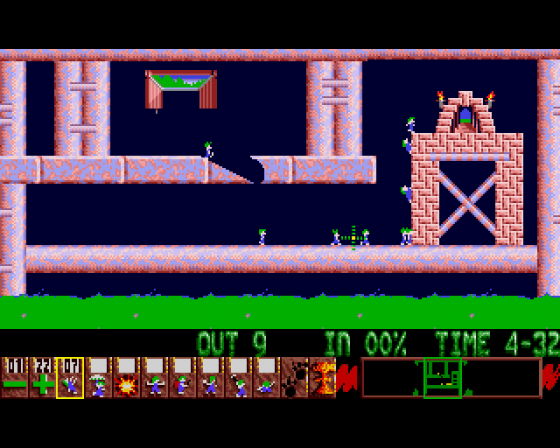 The difficulty of the task is lightened by the sheer hilarity of the action with the brilliantly animated lemmings dying in umpteen humorous ways, while the infinite continue-plays and password system mean you can never get too frustrated.

The two-player game plays totally differently, requiring lightning-fast reactions and devious tactics to sabotage your opponent's efforts - it's often a miracle any lemmings survive at all!

As long as you don't feel too sentimental about fluffy animals, Lemmings should have you in stitches. 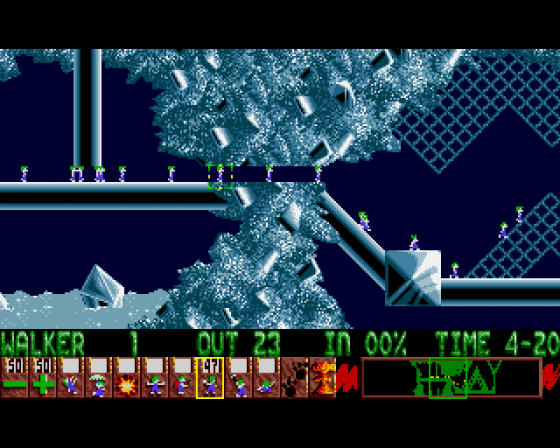 Playing against an experienced Lemmings user in two-player mode can get very frustrating for a complete novice. Just trying to keep all those nicely animated pixel-high grandchildren of the Little Computer People from wandering around is a nightmare task in itself.

Especially when the slightest thing kills the little beggars - they lynch machine is evil! And this is without some swine of another player named Phil blowing holes in the floor and putting my lemmings through sheer hell!

Despite a small grievance over the lack of background graphics I was really hooked. The open-ended nature of tackling each puzzle with the limitless possibilities of using skills and the originality of it all makes Lemmings a remarkably addictive puzzle game. 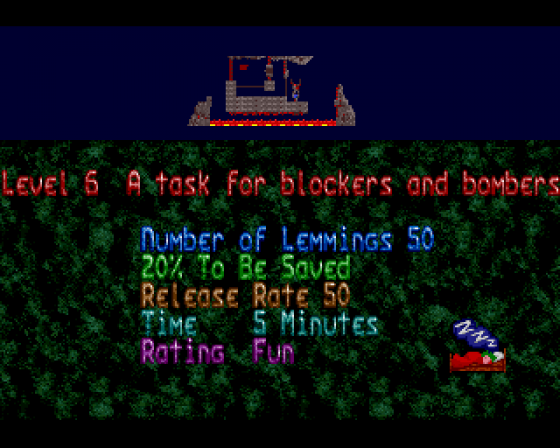 With this one you quickly know who your friends are (and enemies when it comes to going up against the Ed).

Graphics 70%
Simplistic but effective with a nice variety of backgrounds, including Shadow Of The Beast and Menace landscapes.

Sound 80%
20 humorous and enjoyable tunes plus some good spot FX - i.e. "Oh no!" when lemmings self-destruct! 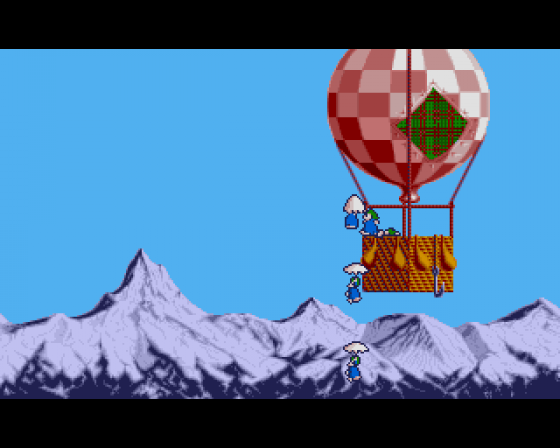 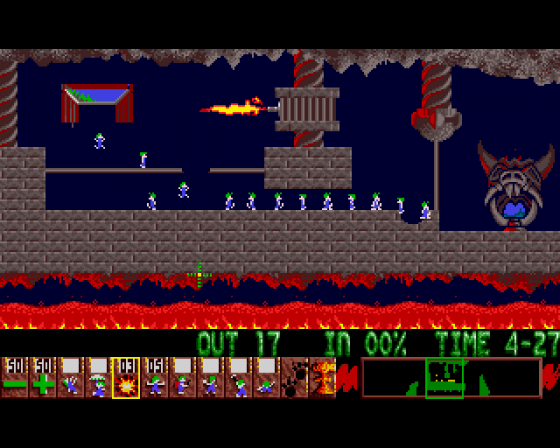