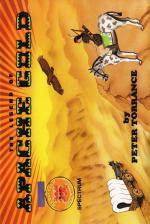 The first of Incentive's releases on its Medallion label, Apache Gold was written using GAC by Peter Torrance, of Seabase Delta and Subsunk fame. Also bad pun fame, for instead of playing Ed Lines, you're now playing Luke Warme, the dimeless cowboy who hears the legend that Apache gold is to be found in an Indian burial ground. Any resemblance to the real west is purely accidental, as Luke is given the benefit of eternal life - yep, folks, an adventure game in which you can't die! Why did no-one think of it before?

You start this enchanted existence in the back of your wagon in a wide open plain. Ah, just fill your lungs with the rich smell of the tall wild grass ... and the horse droppings. In your wagon you can see a bag of oats and some reins, though you're strangely not allowed to get the bag. You can feed the horse and flick the reins, soon finding yourself attacked by Apaches and bunged in a wigwam, with only one exit and an Indian guard who's easily scared off. Then you explore the Indian camp, finding such indigenous (good word, eh?) objects as a tomahawk, a pipe of peace and a squaw's handbag. A handbag? Well, you do get a chance to show it off later.

The first few problems are fairly easy, but as you might expect from this author's previous titles, there's a lot of humour about as well. I found a fairly friendly eagle at the top of a rock formation, and for no logical reason tried giving it a jar of Doctor Dodgy's Miracle Cure, that I'd already discovered was rather a thick viscous liquid. Now I'm left with an extremely annoyed eagle with sticky wings. Examine a fern and you discover it's a peculiar Indian variety: a tomtomato plant.

The game's fun if not stunning, though it's slightly spoiled by lazy screen layout which leaves odd letters and even full stops on their own at the start of a line. At budget price it would be a must, at full price it's more of a maybe.

The game's fun if not stunning, though it's slightly spoiled by lazy screen layout which leaves odd letters and even full stops on their own at the start of a line.