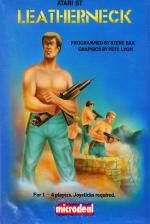 If you know three people who enjoy doing mindless mayhem - and let's face it, most gamesplayers do - you're going to enjoy Leatherneck.

In fact, if you don't have three suitable friends, you'd better find some, because the game is practically unplayable in one player mode.

You've seen Commando, you've seen Ikari Warriors; well, this is basically the same thing, a vertically-scrolling arcade blast in which the aim is to knock off as many fanatical enemy soldiers as you can.

The twist is that by buying a printer port adaptor (£6) you can plug in two extra joysticks, and any number of players from one to four can fight simultaneously. It's best to co-operate, but it's quite possible to shoot one of your colleagues if you get fed up with him.

The scrolling, animation and graphic design are all excellent. The four stages of the game - you can start at any stage depending on who presses their fire button - each start with a landing craft depositing you in the jungle.

The backgrounds are littered with crashed helicopters, ruined huts, sandbags, boulders and thickets, from which spring gun-toting soldiers, flinging grenades and trying to gun you down.

You have three selectable weapons, a light machine gun, heavy machine gun and grenades (which you'll need to take out pillboxes).

Ammunition for each can be picked up along the way, but of course, you'll have to fight your buddies for the chance to pick it up.

On the right hand side of the game is displayed your score, lives remaining, and ammunition level. The three weapons start off with equal ammunition levels, and you must select the right one to get through each area; the light machine gun fires faster, but the heavy gun has a longer range and the grenades, though great for clearing out large concentrations of enemy troops, really should be kept for fortifications.

You can change weapons by wiggling the joystick, but it's more reliable to press control keys, which are grouped in a quarter of the keyboard for each player.

The sound effects, of digitised screams, gunshots and explosions, are excellent, as is the David Whittaker music.

In fact, the only possible objection to the game is that it gets so frantic - with hordes of soldiers, pillboxes, mortars and mantraps firing at you - that there's no way a single player could complete even the first level.

Excellent fun, but it would have been better if the difficulty level varied according to the number of players.

And by the way, if you're playing with a pal and you're not getting on with him, you can always shoot him!

Excellent fun, but it would have been better if the difficulty level varied according to the number of players.