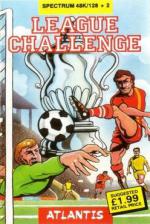 Once again it's your chance to manage your very own soccer team. League Challenge puts you in charge of a lowly Fourth Division club, and sets you the task of building them up into a powerful force in the world of football.

Play kicks off with the newly-installed manager naming his club. The computer then assigns a panel of 12 players, divided into three categories: defence, midfield and attack, each has a personal fitness level rated between one and nine.

A season consists of 15 league matches, plus FA Cup fixtures. The computer then totals the skill levels of the chosen team, and adds up the total fitness of all players. It then displays the team's combined strength alongside the strength of the opposition. From these figures, the manager can work out if he still needs to strengthen the team.

The team's training schedule is chosen before each match. There are three different levels of training: Moderate; Vigorous and Intense. As their names suggest, these vary in effectiveness - consequently they also become progressively more expensive.

Saturday's match follows the 'weekly' preparations, with the game displayed as an animated action sequence. During play, the manager can only sit tight in the dugout and wait for the verdict. The results of all the league matches are displayed, and the league table is worked out.

As team manager, the club's financial position is in your hands. Incurring debts of over £250,000 bankrupts a club, sending the team back to its starting position at the bottom of the league.

At the end of the season the top three clubs are promoted and the bottom three demoted - a cash bonus is awarded to the manager depending on the season's performance.

'This is a real step backwards for football management games. It has been several years since ADDICTIVE released their classic Football Manager, and still after all this time no-one has managed to improve on it. League Challenge is slow, unrealistic and very monotonous. There is nothing about it that even remotely impresses me. The 'action' is tedious, and the bits in between are pointless. I couldn't recommend this. Even at its low price it still offers bad value for money.'

'As if the old Football Manager wasn't bad enough, ATLANTIS have come up with a sub-standard product that's even worse. The graphics don't really deserve the name - they are very simply drawn, inaccurate and unanimated. There are no new boundaries broken - it's just a case of progressing through a few menus and hoping that you'll win. Different team selections make little or no difference to the outcome of the matches. League Challenge holds little appeal - even for the most earnest football fan.'

'League Challenge is boring. The only respite from the drab text-only screen displays are the completely awful match highlights. The characters are badly drawn, the animation is abysmal and the colour choice is even worse. As far as football manager games go, this one is very average, and certainly contains nothing new. Fans of the type might well find it reasonable (especially with its price tag of £1.99), but I think it's very poor.'

Boring. The characters are badly drawn, the animation is abysmal and the colour choice is even worse.