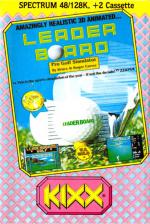 After several disappointing attempts at golf simulations, Leader Board's arrival April 1987 was all the more impressive. Undoubtedly the best of the genre, one of its main assets is the effective first-person, 3-D perspective view of each hole, with a new view created from wherever the ball lands. The game also contains four different courses which can be played in any order by up to four players. One of three skill levels can be selected for each player, allowing beginners to compete with experts.

Each player has fourteen clubs at his disposal, ranging from the hard-hitting woods to the essential putter. After selecting the appropriate club, the shot is aimed simply by placing the cursor in the desired direction. The key to the game is in the hitting of the ball, however. You start your swing by pressing fire, a power meter then rises until you press fire again to set the correct percentage. A second, 'snap' meter then starts rising, this sets whether the ball is hit straight, hooked or sliced, fire must be pressed quickly and accurately to get the right one. (On Novice level balls are automatically hit straight). The ball can also be sent off course by the wind on the professional skill level. If the ball lands in the water, a stroke is forfeited.

After almost two years Leader Board is still the top golf sim and a great buy at the new low price, although hardened golf fans might be more interested in the Leader Board Par 3 (93% Issue 57) compilation of Leader Board, Leader Board Tournament and World Class Leaderboard.

The top golf sim and a great buy.