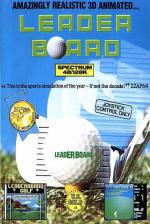 The golf course is water logged, but that's cool because most of the holes in this simulation are played across water.

There are four courses, similar in structure but different in difficulty level, a maximum four players can putt, birdie and generally make fools of themselves Each course is in perspective 3D with the player - looking like a British Rail guard, peaked cap and all - at the bottom of the screen swinging a club.

Before you can tee off at the first hole you've got to declare your ability. Novice play takes place in a vacuum. There's no wind, the ball is not hooked so that it curves across the ground, and it's not sliced so that it falls short on the green or in the water. At Amateur level hooking and slice come into effect, but there's still no wind.

Professional level, and the full blown simulation takes off - along with your ball. You'll have to compensate for wind strength and direction, have perfect judgement in placing the ball on the green and be comfortable with the putter club, otherwise your putts'll be short or skim the rim of the hole and bounce out.

The bad news is the 3D views of each fairway and hole are drawn in approx 10 seconds, which makes the game interminably lengthy. The good news is they could be worth the wait. They're realistic in a blocky sort of way and the scene created by the ball gliding through the air is reminiscent of those lazy days of autumn when the sunlight steams through the trees and you're indoors watching the telly golf (leave it out - Ed).

When the ball lands the scene's viewpoint changes and, hopefully, you get a nearview of the hole - with cardboard stiff flag. If you land in the water, and there's a lot of it, you take the shot again, but also take a penalty.

Each player has a selection of 14 clubs; three woods, nine irons, a Pitching Wedge and a Putter. The woods send the ball the furthest, an average 271 feet for a one or 234 for a five wood. Irons are for shorter distances A two iron, for instance can whack a ball between 100 and 210 feet.

The Pitching Wedge lifts the ball off the ground, but again is for short distances. It's put to good use when you need close control of the ball in strong wind conditions or when you want to hook the ball at a fairly exact angle. If you're a golf fanatic, and know the effects each club has on the ball, you'll appreciate the realism which the authors have put into this game.

Club swings are controlled by the power snap facility which builds up force and direction in the same way as when you're bowling in US Gold's Tenth Frame. When you are ready to make a shot the general power snap indicator appears on the screen. Press the Fire button on the joystick and the bar chart builds to maximum power. Release the button to stop the build up and the indicator starts moving from max hook, where the ball goes left, to max slice where it goes right. Press the Fire button again when you're satisfied with the ball angle.

Once you've played the distance and are on the green, near the hole, the computer acts as auto caddy and gives you a Putter. The Snap indicator is, of course, different here as there's no need for hook slice. Just tap the ball, but again be careful because the power measurement is on a different scale. Even if the bar thrusts through half the chart the ball will only travel a few feet.

I score leader board as a straight five under par, and it's heading for a course record where simulations are concerned. It's the best golf simulation yet. It may not be the fastest game on the circuit but it's the most enthralling.

Real 3D golf, not puny putting. Five under par for Leader Board, it'll take the simulation market by storm.

Real 3D golf, not puny putting. Five under par for Leader Board... It'll take the simulation market by storm.