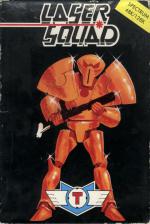 Who could resist going WOWEEE! at the thought of a strategy war game which you could understand in less than a day! VVOWEEE! Found one!

Laser Squad is typical of a strategy combat game in its 'concept'. Y'know the sort of thing, given a limited amount of resources you can arm your troops, playing off expense and weight against firepower. But where Laser Squad scores its Brownie points is in its ease of use and understandability. You only need to use five keys or a joystick for the whole game!

Now let me overload your brain with some more mind-boggling facts. Laser Squad is simply a host program for countless individual wars. All games operate on the same basic principle, meaning you move in the same way, and pick up and fire your weapons in the same way, via a simple, but comprehensive menu system. This appears in the right hand side of the screen while the 'real' action takes up the majority of the left and middle part of the screen. It's uncluttered, easy to understand and perfect for this game.

Control over which character you want to address is via a cursor, which not only tells you who you are dealing with when positioned over a player, but also what you are dealing with as far as computer terminals and the like are concerned. What you can get done in any one turn is limited by 'action points'. It takes action points to turn round, action points to move forward and backward and action points to pick up weapons and use them. So if, f'rinstance, on your last turn you used up all a certain players action points in moving around, although by the next turn he'll have plenty more to play with, if he encounters an enemy betwen goes then he cannot fight back. There's something to be learnt there!

Provided with the cassette come three ready made scenarios. First is a game called The Assassins. This is quite a simple game where you have to scrub out a bloke called Sterner Regnix in his private home. Obviously he has a number of guards protecting the place, and, more often than not, they're armed to the dentures. Pass the heavy laser, Doris...

Scenario two, Moonbase Assault, takes place on the lunar landscape (ver nice graphics, too), where you play the rebel forces who are trying to smash the Omni Corp databank 'cos it holds all sorts of incriminating evidence against you. Moving onto game three, Rescue From The Mines, you find a completely different sort of game. Rather than blow up somebody or something else, you have to rescue three of your compatriates from within deep dungeons.

The first thing that strikes you about all of these games is how arcade-like they are rather than the normal 'for-strategy-read-boring-blue-blocks'. Each landscape has been carefully drawn in detail (down to recognisable tables and swiveling chairs), and the fast scrolling takes you back to the heady days of TLL and other arcade classics. Not that this is any megashake by todays standards, but for a strategy game, well...

If you're wondering whether I would recommend this game, then I suggest you never waste your money on a Mensa Test. I think Laser Squad is mega fab, and I'm looking forward already to the expansions that Target Software has promised. And that's the opinion of someone who has never been interested in strategy wargaming before.

A sophisticated strategy wargame with endless possibilities. On a par with Elite for thinking warmongers.

A sophisticated strategy wargame with endless possibilities. On a par with Elite for thinking warmongers.