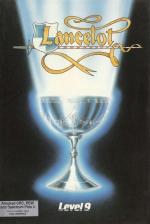 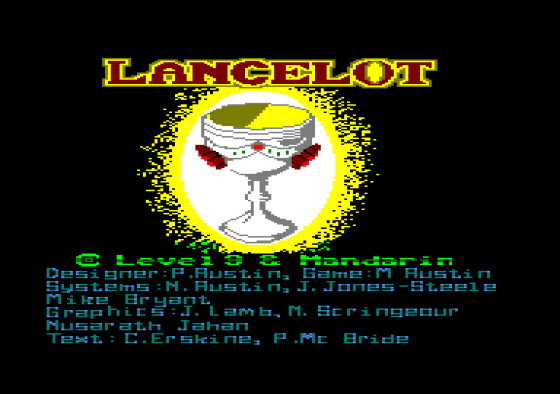 Level 9 have now turned their backs on Mandarin. It seems to have been a rather brief affair, and Lancelot is likely to be the only Level 9 product coming out under this label. Does it deserve this unique status? Certainly the scenario is a potent one. Those not familiar with the Arthurian legends can test assured that there is adequate documentation with the game, but in brief the saga concerns Arthur's reign over Britain, aided by his Knights of The Round Table.

Thence comes Lancelot, a squire, who defeats Arthur in combat but spares his life and is knighted by the king in recognition of this deed. Guenever (that's how they spell it}, Arthur's wife, takes a fancy to the new knight and Lancelot finds himself bound to her service, both through his own inclinations and her desires.

Level 9's game tries to pack an awful lot into what is essentially a three part adventure. The first two parts are effectively one, since you can move between them with ease. However, you can also choose, at the beginning of the game, to move straight onto the final chapter - the Search for The Holy Grail.

You start the game outside Camelot and must first fight with Arthur before entering the castle stronghold, where you are knighted and then sent out to win yourself a reputation by rescuing an assortment of captured knights. The puzzles at this stage are extremely simple and this phase, in common with the last three Level 9 three-parters, simply provides an opportunity to get used to the system.

Unfortunately, it also provides an opportunity to discover some very strange programming quirks in the game, which abound throughout all three parts. For example, you cannot remove your armour at will, but find yourself taking it off quite happily before climbing a tree; you can clean your armour, but you can't clean yourself - even though you are dirty and so on.

There are many trivial illogicalities like these which do not actually affect the gameplay but do seriously mitigate the atmosphere of what could otherwise be a superlative game. The characters also suffer from sloppy programming, from time to time making quite inappropriate remarks, often relating to some action or situation no longer relevant.

What is far more serious is the actual structure of the game. There's a huge amount of material condensed into this adventure and the space available just isnt enough to do it justice. As a result, great quests which could have made an adventure in themselves are dismissed in a single puzzle, leaving the player feeling, if not cheated, then at least let down.

For example, at one stage you are told to rush off and help raise the siege of Lyonesse. You arrive on the scene, solve one simple puzzle that takes about five minutes, and the whole army surrenders! In another case, you defeat an entire army without solving any puzzles at all! Truly, this Lancelot is, as Chaucer put it, a "parfitte knyghte"!

Against these weaknesses you have to place some superb scene-setting in Camelot and elsewhere, and one or two very satisfying puzzles. Furthermore, the character programming, although at times sloppy, shares some of the strengths of Ingrid's Back in that you can follow and observe characters getting on with their daily lives - a process that adds greatly to the atmosphere of the game.

The graphics are at times very attractive, but they don't quite match Ingrid's Back for quality and, in one or two places, are very poor. Like the game structure itself, the presentation is a curate's egg of powerful, convincing moments, and depressingly low standards. The blurb quotes Pete Austin as saying this is their best game yet, but I find it hard to agree. When it hits the high notes, it certainly matches anything the company have done so far... but the low notes seem even more depressing as a result.

What Lancelot shows is that there is a tremendous potential still to be explored in setting text adventures round potent story scenarios such as this one. It also shows that you need either to be very selective in what you try to squeeze into a game, or else you need an awful lot of programming time, disk space, and patient play-testing.

When Lancelot hits the high notes, it certainly matches anything the company have done so far... but the low notes seem even more depressing as a result. 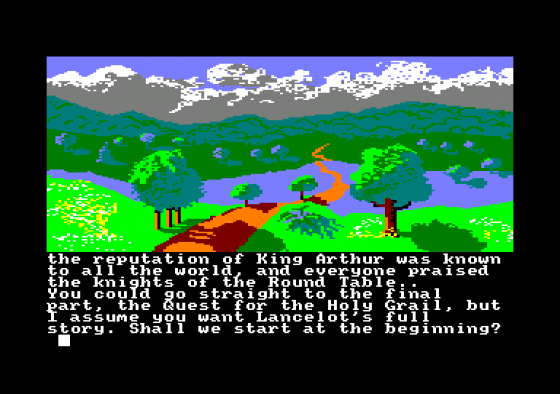