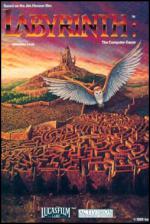 After reading the preview of Labyrinth in December's C&VG, I was quite excited when I eventually got my hands on a copy. Once loaded, the game asks you some questions to establish your sex, name and your favourite colour, before taking you into the first of 23 scenarios.

Most of these are the same as in the film, but although the characters are the same, the story itself is different. You begin in your home town, outside a cigar store. The screen is split into two sections. The top describes the area in adequate text, while the lower section contains two word-wheels. You view the wheels edge on, and their rotation is controlled through the keyboard. One has a large selection of verbs, and the other has various nouns. The vocabulary available in each wheel is constantly changing, enabling you to carry out commands suitable to the situation in hand.

The system of word-wheels only allows two-word input, but it can be used very quickly and gets rid of the problem of finding the correct combination of words. The answer is there - you just have to learn how different object and characters respond.

The first scenario ends at the cinema. Here you see Jareth, the Goblin King on the film screen, in glorious animated graphics.

He challenges you to find him in his hidden world, or forever to be in his thrall. Naturally you decide to find him, and defeat this terrible man.

The next scenario then loads - The Labyrinth itself. Now the text description screen turns into a graphics screen, in which, by moving the joystick, you control the characters' movements both across the screen, and into and out of it, as you run around looking for objects and characters.

The exit from here is cleverly disguised, but when discovered, you talk through to find yourself in the Brick Hallway. The picture of your character (dressed in your favourite colour) is as you would expect from Lucasfilm - large and well defined. It gets bigger and smaller as you move in and out of the screen, giving the graphics a degree of perspective, which, along with the animation of the character, makes it look as though it were an actual film.

In each scenario, by using the word wheels, you take various objects which help in your adventure.

Although, as the title suggests, the game is a labyrinth, it's no boring maze game, as new ideas are cleverly added for extra variety. Deeper into the labyrinth, you need to play arcade-type games to achieve a certain goal, including the final defeat of Jareth. These give the game another exciting aspect, along with the word wheels and joystick control.

This is a terrific game, only spoiled by delay whilst loading up each new scenario - a small price to pay for such a brilliant game.

This is a terrific game, only spoiled by delay whilst loading up each new scenario - a small price to pay for such a brilliant game.