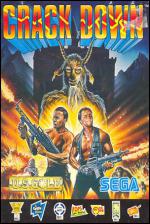 Patrick Sims, born in Shanghai but now of US citizenship, is at the heart of a suspected narcotics ring which uses a computer import firm as a front. Pacific Shipping's revenue is suspiciously high and it is suspected that drugs are being smuggled in the shipments.

The screen is divided into three main areas. At the top there are views of the rookie officer's current location. A message panel separates it from the main information panel which occupies the lower half.

The main menu allows you to Go To locations, those available being known buildings, rooms, or that of a departing vehicle which can then be Searched. If something is found, its information occupies the lower screen area and the information it holds can be stored with the Snap Picture option. Bugs can be placed in chosen areas and the possible clues they record can be Reviewed.

People your partner meets will include members of Sims' group, whom you can Identify from your files. You can have short or long, friendly or hostile conversations depending on their nature. You can Communicate with them for a little longer but this can lead to aggression and possible violence.

Arrests are a major stepping stone to completing the mission but should not be carried out lightly as bad decisions will cause your partner to quit and your job to return to its ordinary humdrum.

Brain power was never my strong point so I was put off this game just reading the blurb on the back of the packaging. Still, adopting a Zzap! reviewer's open mind (you need one to work here!) I waded through the quite lengthy instructions and began my investigations...

Trundling around town in my van (complete with A-Team style stripe), poking my nose into other people's business, I ended up re-searching locations endlessly (clues were sparse!). None of the complex duplicity and espionage seemed particularly realistic and it all left me a bit cold.

While I couldn't get anywhere in this, an adventurer might and could gain a few hours' pleasure.

I always thought it was in New York that all the tyre-screeching car chases, vicious punch-ups and brilliant detective work went on but, apparently, LA is the place to be if you want a piece of the action.

With a suspected drug-smuggling ring going on, it must be. Anyway, I thought the selection of a partner from a group of our was rather mean, particularly as after trying them all, I found them all unsatisfactory. We're supposed to be partners but the rookies have no respect for their commanding officer, quitting at the drop of a hat. Cowards!

Still, even when there was co-operation, clues were hard to come by and much of my time was spent wandering around aimlessly waiting for someone - or something - to actually happen. With careful deduction, steps toward the arrest of nasty boss Sims can be made, but this may not be everyone's style. If you fancy yourself ("Vain creature!") as a drugs-busting Mensa cop ("Oh I see") LA Crackdown is a game of capacious depths.

What on earth is happening to Epyx? A while back, they were one of *the* names in quality software, but recently they seem to have been releasing very mediocre games.

It seems that very little of the innovative programming talent has been taen up by the new team. What we have in LA Crackdown is a standard "investigation" game which is about two years out of date. The style is very much like some of the early interactive menu games but unfortunately there is nothing new or exciting about it to stimulate the imagination.

The conversations are extremely limited, the scripts often being repeated during the course of play. On the whole, there is a sort of off-hand atmosphere which stops you from getting properly involved in the storyline.

Remember, just because it's Epyx, it's not (now) automatically good: LA Crackdown is merely average.

Hookability 64%
Lack of clues slows down the potentially interesting gameplay.

Lastability 62%
All LA's criminal dens to explore but the investigation can become very repetitive.

Overall 61%
A cop story for the graphic adventurer.

There is a sort of off-hand atmosphere here which stops you from getting properly involved in the storyline.