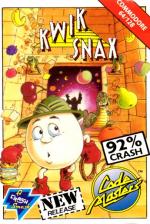 Dizzy, the Oliver Twins' boxing glove-wearing egg, had become something of an unofficial mascot for 80s home micros, and it wasn't long before the Oliver Twins and the UK publisher Codemasters began using the character for games beyond the ovoid's puzzle-solving adventures.

One such title would be Kwik Snax, a pick-up-and-play arcade game for the ZX Spectrum, where players must grab bonus items and crush enemies with sliding blocks. The addictive gameplay and colourful visuals drew praise from magazines at the time, so it would seem logical that the game's inevitable ports should follow suit.

Or so one would think! The C64 version bears no resemblance to the other versions, with programmer Jason Benham creating something closer in style to Pac-Man than Pengo, albeit one where the pellets grow legs and take on a life of their own! Set over 20 rounds, Dizzy must round up and rescue 'Fluffles' from a series of mazes, all the while outwitting hungry enemies looking to turn him into an impromptu omelette.

Fortunately, the bad guys can be zapped with a range of bombs, fireballs and mallets (which is awfully satisfying), and the combination of addictive gameplay and catchy SID rendition of Joplin's The Ragtime Dance make this something of a hidden gem that C64 fans are sure to enjoy.

The C64 version bears no resemblance to the other versions, with programmer Jason Benham creating something closer in style to Pac-Man than Pengo.