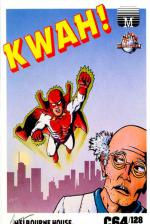 Kevin's back, no not the superstar rat's little friend, but Kevin Oliver whose alter-ego is Redhawk.

For those who missed the previous Redhawk adventure, let me explain. This is an adventure with a difference. The story is revealed in a comic strip which scrolls across the screen as you create the story by commanding Kevin/Redhawk in his battle to defeat the inscrutable Dr Lee.

The screen is split into three main areas. The comic strip gradually reveals itself along the top of the screen as the story unrolls. Three frames are shown at a time and the graphics are of a very high standard.

Beneath this is a status panel and the bottom of the screen is reserved for keyboard input of commands. A sub-section of this area lists some of the principal keywords which may be selected to ease digit strain.

Redhawk is a super-hero whose main attributes are his strength and invulnerability. Kevin is his secret identity and the metamorphosis from one character to the other is by saying the word Kwah. In a flash, Kevin becomes Redhawk or vice versa.

Kevin's latest assignment is to enter the headquarters of that evil oriental Dr Lee to foil his plot to rule the world.

We join Redhawk outside the HQ facing a locked gate which must be opened. Brute strength is no use because Redhawk's code does not allow vandalism. Kevin has a pass so the first command is Kwah so Kevin can enter the building. There is another thing Kevin should do at this point, but that would give away part of the plot.

Once inside, Kevin meets Dr Lee but soon finds himself trapped in a room full of knockout gas. After many trials and tribulations Kevin will discover a fellow prisoner, Rik, who is a computer freak and a strange bird called Redduck. Kevin's mission is to oil all of Lee's plans and to find the secret of his alter-ego.

The tasks which must be performed by schizophrenic Kevin are ingenious but not too difficult if you sit and think for a while. The solution to two of the problems involves the use of a tape recorder but only polite requests written on a tenner will prise the secret from me.

Redhawk can only exist for a limited amount of time so you must be careful not to call him up unnecessarily because you may need his abilities at any time.

The parser which translates the command is a little rudimentary, but the game is so enjoyable that I won't complain too much. For the most part the commands are responded to sensibly but occasionally the text will say that something is visible and they deny its presence when you ask about it. Otherwise, the input system is excellent because you can scroll the cursor back through the last half dozen commands to repeat a phrase you've already used.

The status display shows the time ticking away as Kevin goes about his task, the amount of energy which Redhawk has remaining and the available exits. When Redhawk runs out of energy he will be converted back into humdrum Kevin. At this point the Redhawk energy starts to slowly rise again ready for the next transition.

Kwah! is a great little adventure which will appeal to novice and expert alike. Redhawk deserves to catch on and I'll keep my fingers crossed that we'll hear the cry of "Kwah" in future Melbourne House products.

A great little adventure which will appeal to novice and expert alike.