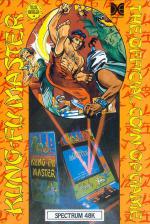 The honourable Kung Fu Master is in a bit of a fix. Hidden within the evil wizard's temple is a fair oriental damsel in distress. In the cause of truth and justice, the martial arts supremo must battle his way through the rooms in the temple to try and save her from a terrible ordeal.

This wizard is no fool, however, and has made sure that his little lotus blossom is well protected against any who might try to rescue her from his dastardly clutches. He has used his magical powers to good effect and has set many traps to prevent her from leaving.

Mystical globes hover sinisterly at head level, waiting to burst and shower our hero with deadly pieces of shrapnel. Vases drop from the ceiling to reveal poisonous snakes which slither around under the Master's feet. He must lump to avoid them or else he will be bitten by the little sacks of venom and won't be at all happy. If yellow spheres drop near the Kung-Fu Master he must watch out, for when they break open they reveal fire-breathing dragons. These can be destroyed, but their flaming breath is deadly if you get too close. The wizard's henchmen are not to be trifled with either. Although you may be a Master of Kung Fu, this does not guarantee that you are invincible. The henchmen will try to dispatch you with a blow to the head or with a sharp and pointy knife.

The Kung-Fu Master walks along the scrolling play area, and has a variety of moves in his fighting repertoire. Flying kicks, body punches and squatting kicks, all accessed in Exploding Fist style, are just some of the ways in which he can dispose of his enemies.

At the end of each floor a door leads to the next level. The portals are heavily guarded by the wizard's lackeys, and a motley crew they are too from giants to boomerang-wending felons, their sole object in life is to stop you from gaining access to the next floor in the temple.

Being a mystical fellow, the Kung-Fu Master has been granted three lives. He loses one of these every time he is defeated by one of the guards in the temple, and falls off the bottom of the screen. The number of lives left is shown at the top of the screen along with the amount of energy left. Some of the nasties in the game sap energy rather than killing outright. When the energy level, represented by a blue line, gets too low, a life is lost and play resumes at the start of the current level.

For every guard despatched to an early grave, points are awarded depending on the power of the vanquished opponent, and a meter keeps track of the score so far. For every 40,000 points collected, an extra life is awarded. Quite apart from all the wizard's henchman, there is another problem for our slanty-eyed hero to contend with. A strict time limit is set to the game, and each level has to be completed before this runs out. A clock in the status panel starts at 2,000 and counts down. The state of the wizard's army enemy is represented by a red band underneath the energy chart, which shrinks a little more as each minion is defeated.

The persecuted damsel is trapped within the fifth level of the temple, held captive in a dark, locked room. The mission is completed when she has been freed. If you want to continue the game, you return to the first floor, but from then onwards there are more of the wizard's minions. The task is much harder second time around...

I first saw this one in the arcades about a year ago. I didn't really rate it that highly then. On the Spectrum, it has lost its nice sound and graphics, and any addictive qualities that the original ever possessed. There isn't anything in this game that remotely pleases me I'm afraid. Even the thought of beating up the odd Ninja bloke doesn't really appeal anymore. The graphics are really very poor - there are so many attribute problems that it's hard to tell what is going on, and the use of colour is also quite bad. The sound, on the other hand, is pretty good. There are a couple of nice tunes and a spot effect now and then. On the whole us Gold seem to have produced another 'no-no'.

Well I suppose I shouldn't really have expected a great translation from the arcade game but the least they should have done is got the graphics and colour sorted out. If you look at someone playing Kung-Fu Master, all that is apparent is the most awful flicker of the graphics. The game is fairy average as far as Spectrum games go and, as a result, it doesn't do the arcade version justice. I didn't like the idea of choosing which level to enter at as this spoils the addictiveness of the game. Each level in Kung-Fu Master is no harder than the previous one as far as I could see. I didn't find myself as stuck on the game as I felt I should have been. Not a brilliant conversion.

The arcade game is nothing mega-amazing by today's standards, but it is playable, and very addictive. Not so US Gold's conversion, however. The front end to the game is quite impressive. The music of you can call it that) is irritating, and the game very definitely lacks something to make it addictive. A big disappointment on something that, with the exception of the scrolling, would convert quite well to the Spectrum, although it looks as though it hasn't. An element of the original playability, albeit a weak element, still exists. A disappointment, really.

Each level in Kung-Fu Master is no harder than the previous one as far as I could see.