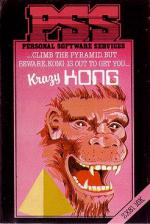 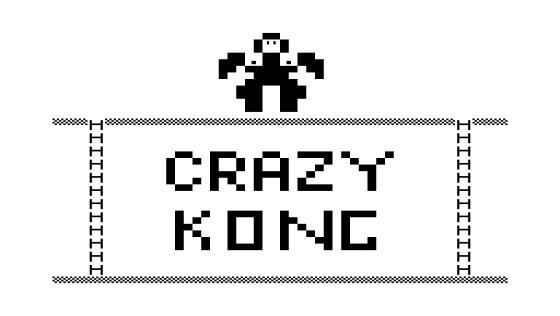 This program is one of the best programs for the 16K ZX81 I have ever seen. Costing only £3.95, it is a real value-for-money program.

The idea of the game is to jump over the barrels and fireballs dropped by a crazed gorilla at the top of the screen. In this version there are three different screens, each as hard as each other. The first stage, which is the same as the arcade version, you are an inverse A, moved by the cursor keys, trying to get to the top of a steel structure by climbing ladders and outwitting the barrels and the fireballs, by jumping with the Break key. At first this is hard, but after some practice, the top can be reached easily. A bonus counts down until you get to the girl (an inverse J). At this point you will receive the rest of the bonus. If your bonus runs out, you will lose a life, or which you have three.

When you press a key, the next screen will be displayed. This comprises conveyor belts, fireballs, inverse dollar signs (worth 200 points) and the girl. At this stage I wondered how I could get to the top, as I could see no obvious route. First, I climbed to the first conveyor belt, which promptly changed its direction, and dumped me into one of the fireball pits. Having one life left, I managed to get to the place where I thought I could go no further. I could see no route of jumping across to a conveyor belt, two character spaces away. I did not realise you could move and jump at the same time; I only thought you could jump into mid-air and back down again. But, having overcome this problem, I waited until the conveyor belt was moving in the right direction, and managed to reach the girl after about 30 tries. Then the next stage...

You have to move around the screen, running over inverse colons (of which there are eight!). The stage, by my reckoning, is the hardest. The fireballs are much faster than you, and if you jump over them; sometimes they come back and you land on them! If you run over a blank where a colon used to be, you will fall and die, but it is possible to jump over them. After practically hundreds of goes, I managed to complete this stage. After that, you return to the start, but everything is speeded up.

One of the best programs for the 16K ZX81 I have ever seen.