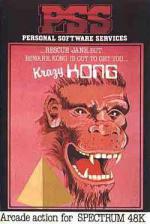 King Kong is alive and well and living in at least two versions of Donkey Kong for the Spectrum. Always one with a taste for a certain sort of woman, Kong has trapped one called Jane and it's your mission to topple him and rescue her.

Jane herself doesn't help much, standing at the top of each of three screens waiting for you to cover the obstacle courses which begin at the bottom.

The first screen is one involving ladders connecting girders. Red barrels roll out and drop from one level to the next when they feel like it, and can be avoided (if they're coming your way) by jumping.

This is done with the fire button on the Kempston. The same goes for similarly lethal fireballs.

If you make it to Jane, there's a second screen involving conveyor belts with pies on them. The pies are probably well past the date stamp, and are also deadly.

The third and final screen involves lifts, tricky to catch and likely to make you fall, but if it's completed, it's Kong who takes the tumble.

With three lives, it's not impossible to complete the game and still win a time bonus, and it's fun trying. Obstacle courses are interesting, but games such as Manic Miner offer far more screens and ideas.

Krazy Kong does have irritating aspects - the incessant playing of the funeral march every time a life is lost, for example, or the difficulty in positioning your man at the right spot beneath a ladder to climb it.

With three lives, it's not impossible to complete the game and still win a time bonus, and it's fun trying.