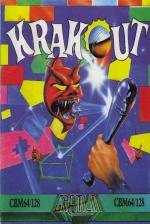 Gremlin breaks out its latest game. Gordon Hamlett takes a crack at it

Do you remember those halcyon days when home micros were but a twinkle in Sir Clive's eyes and the only video games around were Pong, Space Invaders and Breakout?

Machines have come a long way since then but it's nice to know that some things never change. Take Krakout, Gremlin's latest offering, for instance, it's another Breakout clone. Where will it all end? We'll soon be seeing a computer noughts and crosses.

But to be fair to Gremlin, Krakout has moved with the times. It is somewhat more sophisticated than Breakout and more fun to play. For the benefit of anyone who has been brain dead for the last decade and hasn't got a clue what I'm wittering on about, the idea behind the game is to control a small bat and try to knock all the bricks out of a wall by hitting a ball against it. Every time a brick is hit it disappears. The ball speeds up at periodic intervals and your bat is reduced to half size but there is very little gameplay involved.

So how does the 1987 version differ? Well, the basic object remains the same: to knock bricks out of walls, but a host of other features are included to keep you on your toes.

The first thing that strikes you is that the wall has gone. Instead, there are all sorts of shapes: hearts, squares; diamonds and so on. Then there are the aliens that keep materialising. Surely they weren't in the original? On the lower levels, they merely prove distracting: if you hit one, it disappears and you score the appropriate number of points, but it does throw your ball off at a funny angle which is bad news if you hit one close to your bat - there isn't time to reposition your bat for the next shot.

As you progress to higher levels, watch out for the spacehive that launches bees. Touch one of these and your bat freezes in position - you will need to be very lucky to survive this. By level twenty-odd, a Pac-man type character appears who has the temerity to chew up your ball and spit the pips back at you!

Another curiosity is that not all the bricks disappear when you hit them. The coloured ones do but the grey ones play hard to get. If the brick is solid grey then only a bomb will remove it. If, however, it has a small white mark in the top left hand corner then you can dispose of it with one, two or three direct hits.

But some of the coloured bricks have a hidden bonus of sorts underneath. To collect these you must hit the brick twice. This is easier said than done as you have very little time. Only one particular bonus can operate at once and if you hit a bonus brick any previously active bonus will cease to function.

The most reassuring of these bonuses, especially when you are feeling your way in the game, is the one that doubles the length of your bat. Other features include: a points doubler, a bomb and an extra bat, ball or life, grab mechanism that makes the ball stick to your bat so you can aim it better and a screen that blocks off the playing area behind you so that the ball bounces back into play if you miss it. Finally, there is a missile that you can use to take out an entire row of bricks.

There is a comprehensive range of playing options at the start of the game. Particularly useful is the ability to rotate the screen so that you can have your bat on the left or right of the screen. Great for left-handers. But although I enjoyed playing Krakout, I felt it didn't have that certain addictive quality that turns a good game into a superb one. Pink Floyd summed it up nicely when they wrote: "All in all... just another brick in the wall."

There is a comprehensive range of playing options at the start of the game. Particularly useful is the ability to rotate the screen so that you can have your bat on the left or right of the screen.