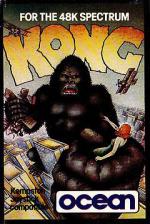 If you are after a Kong game for your Christmas stocking you've got a pretty bewildering choice on your hands.

We managed to acquire four Spectrum versions though there must be at least that many again lurking in the small ads columns of the computer mags.

The most disappointing thing about Spectrum Kong, which all the versions we tested have in common, is that Mario has been reduced to a stick man. This detracts from the cuteness of the game - which was a major reason for its success in the arcades.

First up on-screen was Blaby's Killer Kong with a deluge of barrels which were very difficult to hop over. This game also has the unfortunate distinction of having the oddest Mario. The little Italian must have had too much vino as he wobbles along in the most ungainly fashion with his feet pointing inwards.

If Blaby's Killer Kong was a bit too difficult then PSS's Krazy Kong is guilty of being too easy. I hopped my way onto the third screen on my first go - which was satisfying but not very challenging.

Neither Blaby's or PSS's game managed to capture the feel of playing the arcade game and some silly frills like an RIP tombstone which appears in PSS's game very time Mario gets splatted didn't add anything.

If software houses insist on ripping off ideas from the arcades then they may as well at least try to do accurate copies.

But if these two versions were average, at least they were not as bad as C Tech's Krazy Kong which took about half an hour to load, was nothing like Donkey Kong, and had more bugs than a mangy old moggy. Happily there is one reasonably good version available in the shape of Kong from Ocean.

The game is fairly close to the arcade game, strikes just about the right balance in difficulty, and has some useful extras. Most useful of these is a training mode which enables you to choose which screen you want to start on and avoid having to go through screens one or two to get to the level which you have not yet mastered.

So if you are getting a Kong for your Spectrum - and let's face it the game is as obligatory to your collection as a maze game and a shoot-'em-up - then Ocean's Kong is C&VG's choice.

Kong can be purchased in most high street software outlets at £5.95.

The game is fairly close to the arcade game, strikes just about the right balance in difficulty, and has some useful extras.