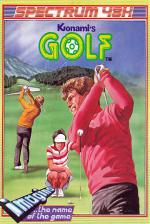 Useful game, golf. Deadly dull to play, of course, unless you actually enjoy hunting around in marshes and woodland for lost golf balls while your partner returns triumphantly to the clubhouse for a swift G'n'T. No, as a way of passing the time I can think of many things Id rather do than play golf, like being stung by killer bees or getting trapped in a lift with a party of drunk photocopier salesmen from Scunthorpe.

It's still a useful game to know about, though, especially if you've set your sights on being a bank manager, accountant or a high class solicitor. Fortunately, you can now find out all there is to know about the ancient game for less than the price of 40 Walnut Whips. With Konami's Golf you'll be able to talk all about slices, hooks, fairways and bunkers without even having to watch Around With Alliss. Everyone will be fooled.

The game covers nine holes of Japanese parkland, on which you swipe your ball towards its eventual target anywhere between 160 and 470 yards away. Allowing for distance and wind speed, you choose your club and set your aim. You then decide whether to hit the ball straight, hook it or slice it. and then you club it to kingdom come, or in my case into a clump of trees!

It's all great fun, if not very taxing, and the graphics are lovely to look at. Putting is probably the game's major weakness - the "borrow" on each green can only be worked out by trial and error, by which time you've played about 27 shots. But let's not get too technical - Konami's Golf certainty doesn't. As a game it's more likely to appeal to non-golfers, though as a form of computerized cribsheet it's a godsend to anyone sensible enough to avoid golf itself.

A game that's more likely to appeal to non-golfers... As a form of computerized cribsheet it's a godsend to anyone sensible enough to avoid golf itself.