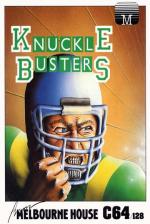 An extremely nasty criminal called Deke has been sentenced to be turned into an android - and all because of the evil crimes he committed. But he's not going to give up without a fight.. so he broke out of his cell, sabotaged the central computer - and now all he has to do is get far enough away before the entire place explodes.

Deke must be guided through the maze-like complex, the city streets, the seedy downtown precincts and the city wall - before he and the city go up in smoke. His progress is hampered by the presence of five types of android guard, which pursue and attack him throughout his escape attempt. Attacks by these guards drain Deke's energy - as indicated by a bar at the bottom of the screen.

Deke can defend himself by punching and kicking, although some droids are more difficult to destroy than others. To make matters worse, as soon as one droid is disposed of, another appears in its place - so, the best bet is to keep moving at all times.

The city is built on three levels, with the hero jumping from one level to another to avoid the marauding androids. The screen scrolls left and right as Deke runs through the complex. Doors are encounted in the walls of the city and prison complex, and positioning Deke in front of one of these and pressing the space bar takes him to the next section. Some of the doors are locked and require a key to open them. Keys are collected by looking under the oil drums and wooden crates which are situated around the complex. Other items which can be found by this method include extra strength, extra lives and bonus points. Occasionally, these receptacles contain poison, which is another drain on Deke's energy.

Unfortunately, the graphics and sensational soundtrack have been let down by the rather limited, and ultimately repetitive, gameplay. The fighting sequence has no 'feel', and it's virtually impossible to gauge the strength of an android - or when it's about to explode.

Another problem is that the backdrops are very similar, giving no real sense of progression. Te game is very difficult to play - if Deke isn't being beaten up, he's losing his way. Still, if you can actually get into the action, there's plenty there to keep you thumping and kicking for a while.

Knucklebusters could have been a fast, all-action and highly playable variation on the beat-'em-up theme. But it isn't - mainly because there doesn't seem to be much skill involved when fighting the androids.

The gameplay lacks variety, and there are only a few fighting moves available - which means that the whole thing quickly becomes tedious.

It's a great shame that impressive graphics and an incredible soundtrack have been wasted on a fairly run-of-the-mill game.

Knucklebusters is boring, these is no escaping it. Melbourne House have done a good job of disguising the fact, but basically the gameplay is drastically lacking in content and fun

From the start I found this monotonous, and after I'd seen most of the locations I didn't want to play it any more. The graphics are really slick - the characters are well animated, the backgrounds are detailed, and the scrolling is superb.

The soundtrack is brilliant - well up to Rob Hubbard's usual standards, although the spot effects are dull and unimaginative. Knucklebusters is a nice piece of software, but not much of a game.

Lastability 49%
Rather repetitive and dull.

Value For Money 48%
Too expensive for an exercise in programming expertise.

Overall 56%
A fair to middling beat-'em-up but it could have been far better.

A fair to middling beat-'em-up... It could have been far better.