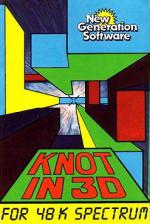 Malcolm Evans has produced a game in which you are stuck in a large 3D space in which an opposing craft wishes to 'knot' you with its and your trail. It is very much like a 3D blind alley.

Malcolm uses some of the best fast action colour graphics I have seen on the Spectrum so far. The trails which the crafts leave are shown as large blocks of colour, which produces an absolutely stunning display. Initially it is a little confusing, but one soon adjusts to the idea of perspective. The game finishes when you have collided too often with the trails left. Your status is shown at the bottom of the screen.

A highly original, professional and exciting game, and one that I could play all night - very highly recommended.

A highly original, professional and exciting game, and one that I could play all night.