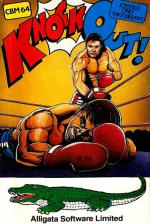 Some time ago I laboriously typed in a BASIC listing for a boxing game which gave a bird's-eye view of a boxing ring. The boxers could only throw left or right hooks but could move all around the ring. Knockout from Alligata reminds me of this game except that the view is from a ringside seat and the opponents can only move left and right across the centre of the ring.

Admittedly the graphics are very good but the entertainment value is limited, in many ways I prefer my Basic game.

The opening screen allows you to choose a game against the computer or a two-player game. The stamina of the boxers may be set and, in the one-player game the movements of your opponent can be preset.

Above this selection menu the name of the game revolves in a horizontal plane, into and out of the TV screen. A nice touch which is unfortunately not supported by the rest of the game.

At the end of each round the bell sounds and a suitable notice floats across the screen. The top of the screen indicates the state of each man by two rows of chevrons extending from right and left towards a KO logo in the centre of the screen. When one of the player's chevrons reach the logo, their boxer hits the deck and the game is over.

After three preliminary bouts, you get a crack at the European championship. A successful result will give you a Championship which is contained on side two of the cassette.

A successful result will give you a Championship which is contained on side two of the cassette.