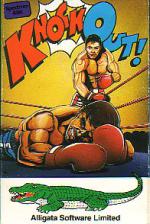 I suppose a boxing game is a natural progression from the likes of Bruce Lee and this Alligata offering is the first of many.

In all you will light three bouts with each of two opponents, Italian Stallion and Slugger Sam, and a gruesome looking pair they are too. Your first opponent will come out fighting from the blue corner. Using either the keyboard or the joystick you control your man through some simple boxing manoeuvres to inflict as much damage on him while trying to avoid his fearsome punches. The game allows you to throw head or body punches or to defend yourself by putting up a guard. A stamina bar with eighteen graduations suffers the loss of a graduation per blow received. For every blow you score against Slugger a little arrow appears at the top of the screen and when the line of arrows extends across the screen and reaches the 'KO' marker then you have won the round.

Slugger has an advantage because his punches not only reduce your stamina bar but reduce his damage by one arrow. A skilful player can reduce this advantage by delivering body blows while Slugger's guard is up that scores two arrows.

After winning three bouts with Slugger you are given a secret code to be entered before you can load the next opponent from the other side of the tape. Defeating Italian Stallion requires a great deal more skill because he is an extremely unpleasant being.

'I didn't really like playing Knockout, I'm not sure why because it's got great graphics and even a bit of the tune from Rocky 3 at the start. I just found it totally unplayable and not at all addictive, I think it was something to do with the speed of your man's reactions which where both slow and unrealistic'

'Boxing is a very difficult game to simulate on a computer and it can only be done adequately by including a lot of detail and skill requirements to make it addictive. Knockout lacks both ingredients, after two rounds l was bored. Neither a crowd or a referee are represented and the player only has a choice of two punches. The movements are pretty real and fluent, at times they look effective. The sound is okay but does drive you mad after a while. I think more could have been made of the game if a wider choice of competitors had been offered'

'If I hadn't played the arcade boxing game I may have been a little more impressed with the game. The graphics are adequate but the whole game is let down by the slowness of the action and what appears to be a poor response by the player's man.'

The graphics are adequate but the whole game is let down by the slowness of the action and what appears to be a poor response by the player's man.