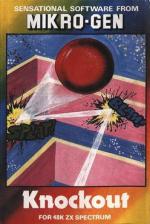 Knockout is a game in which you compete against the Spectrum or up to three other players, and is effectively a computer version of the popular board game 'Rebound'. The object is to bounce balls around a board and leave them within firmly defined scoring positions. Each player has four balls to a frame and opponents take it in turns to play each ball of the frame.

The screen display shows a plan view of the board with black walls bent in the shape of a tight G, the ball being shot from the top right end of the G, rebounding off the end walls and ending up in the tail of the G where there are two blue areas of scoring and three green higher scoring areas before a yellow out of bounds.

The player's ball (up to four different colours) is positioned vertically for its shot, an angle determined, and a strength of shot by onscreen prompts and the cursor keys 6 and 7. The balls all remain in play until the frame is completed so there is the chance of knocking an opponent's ball, or your own, into better or worse positions for scoring. Players enter their names at the start of play and the computer scores for each and keeps a running total. If you are on your own and only enter one name, then you will be playing against the computer.

Control keys: all done with prompts and keys 6 & 7, & Y
Colour: effectively plain and to the point
Graphics: simple, ball rebounds are very good
Sound: good
Features: against computer or up to 3 other players

'You might think from the title that this is a 'Breakout ' type of game - but it's not, more a new breed of computer bowls, the sort they have in pubs. I liked it very much, why, I don't really know! But it is a very simple game to play and suitable for all ages and all types. It's difficult to say how addictive people might find it, but at a guess I would say very. It's also good that you can play by yourself or with others.'

'The game is played in frames up to a maximum of nine, and is a good conversion of a floor or board game to the screen. The game is quite good to play, although not very addictive because the true game calls for physical skill in placing shots, but the fact that it's different places it above average.'

'There's nothing spectacular about Knockout. The graphics are essentially simple, but everything is elegantly planned and implemented. Of all sports simulations I've seen recently, I think this is the most appealing and a worthy addition to anyone's collection.'

Of all sports simulations I've seen recently, I think this is the most appealing and a worthy addition to anyone's collection.