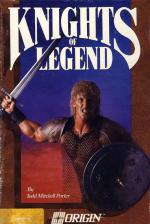 The kingdom of Ashtalarea is one shrouded in a history of dwarves, orcs, elves, magic and mystery. A kingdom of adventurers, by adventurers, for adventurers. If you're not the type to settle down and earn a decent living, trading or farming, then Ashtalarea is for you: Inhabitants offer rewards for quests successfully undertaken, priests offer their healing powers for wounded heroes, and weapon masters offer training in the art of surviving. If not for all the enemies wandering around, Ashtalarea would be a great (and safe) place in which to make a fortune as an adventurer.

As with most RPGs, your first task is to create characters with which to explore Ashtalarea. You can create as many as you like but only play with a maximum of six (it's advisable to do this to give a better chance of surviving). Character generation is extensive and time-consuming but interesting. It features gender, class and all other options usual with this style of game - you can even edit graphic depictions of your heroes.

Play begins at a tavern in the town of Brettle. It is only at hostelries such as this that you may save your game position (achieved by staying the night). Most Inns charge for B&B so you need gold to save a game. However, should you be skint, you may risk your inventory (and worse) by staying in a free but sleazy hostelry.

In towns you discover all manner of retail outlets (weapon smith, armourer and shops) from where the wealthy adventurer may purchase most items required for a successful quest. As you wander around town, you and your party are depicted as a spinning helmet.

Once you've seen enough of town life (and armed yourself as best you can - weapons can be very expensive) it's time to venture into the wilderness in search of a quest or two.

There appears to be no real goal in Knights Of Legend, apart from becoming a successful adventurer and earning lots of gold (enough of a goal for anybody, I suppose).

The game is played using keys only, or keys and joystick, to choose actions from an icon panel at the bottom of the screen (these change to suit your situation).

Now for the complaints... It took six minutes and seven disk swaps to load the game! It then took me *five hours* to create two characters, walk around Brettle, buy a bit of armour, and return to the Inn to save my game. There was no challenge during this time; only the impulsion to visit every building just in case it contained something of import (which is usually didn't).

Communication with NPCs (Non-Player Characters) can get confusing, at one point I asked a guard about a certain person he'd mentioned, from which he took me to be that person and proceeded to give me a task to complete.

I came across a crumbly old castle on the road and it took four disk swaps to get in.

There are good bits as well though.

Graphics throughout Knights Of Legend are great, whether depicting your success at combat or displaying buildings or characters they're very good. Scrolling is very fast and smooth, and the game has a huge play area.

In fact, although when I set out on my initial trek through Ashtalarea I thought I'd die of boredom, the more I progressed the better the game became. Extensive combat commands (such as panic, headbutt, punch, slash and berserk) make for interesting - even exciting - conflicts. And the teachers of magic, weapon skills, and the odd arena where you can prove your worth and up your grade as an adventurer all add to the depth.

The player's handbook is quite hefty and requires reading thoroughly but the reference card speeds up initial plays. If you have the patience of Job then Knights Of Legend's incredibly slow gameplay system won't bother you too much and you'll be able to enjoy the game for what it is; if you're not patient, forget it! Did I mention that the graphics are really good? [Yes - Ed]

Knights Of Legend modules are planned, through which you'll be able to explore four more Kingdoms.

If you have the patience of Job then this game's incredibly slow gameplay system won't bother you too much and you'll be able to enjoy the game for what it is; if you're not patient, forget it!