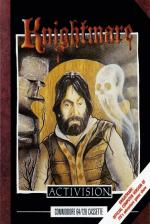 In an extremely strange licensing deal, Activision have released a game based on the popular children's TV programme, Knightmare. The original featured a team of kids directing a blindfolded friend around a computer-generated labyrinth of puzzles. In this version, the player guides a helpless knight around a similarly perplexing series of dungeons.

The display features cutaway 3D, viewing rooms as pages in a book. Each time the knight moves from room to room, the page turns to show the next scene. Commands other than movement are achieved from the keyboard, whereby single keypresses represent the verbs and nouns of the command.

The knight's objective is to escape from the castle, collecting items to help him do so, and avoiding the creatures that dwell within. Occasionally, the knight encounters magical creatures who set riddles that must be answered correctly for safe passage. Failure to answer within a time limit or selecting the wrong response from those provided results in death.

To aid the knight in his quest, he may consult the twin oracles that monitor his progress. These consist of one good and one bad, who attempt to help and hinder him. The player can gain many clues by examining their comments and statements.

The knight also finds magic, which may be used for a variety of purposes. Where, when and how to use the spells must be deduced by the player.

The knight's life force is represented on the right of the screen as an ever-decreasing candle, which recedes more rapidly when under attack. The knight may deend himself when in possession of a weapon, by rapidly pressing the fire button to inflict damage on the attacking creatures. When the wick is completely burnt out the knight dies and the player's quest is terminated.

Adventure-oriented arcade games are very much an acquired taste - especially when they're as frustratingly hard to play as this one. The contrived gameplay and apparently illogical puzzles conspire to make Knightmare a very peculiar game, which is definitely aimed at the adventure market. If the TV programme had been as difficult as this, the poor old contestants wouldn't have stood a chance!

Graphically, it's very good: the backgrounds and various disembodied heads that appear to give you advice and ask riddles, are all very nicely drawn, as is the burning candle which acts as your lifeforce meter. Sadly, though, the animated sprites leave a lot to be desired, shuffling around the screen in a distinterested fashion.

I was immediately impressed with the presentation of Knightmare - especially the effect of a turning page to create the impression of a storybook scenario.

The graphics are inoffensive and generally the game is fairly polished and easy to use. After playing for a while, however, my natural ineptitude for adventures became clear, when practically zero progress was made.

The game has some very obscure puzzles and the series of actions employed to negotiate the labyrinth can be extremely elusive. I'm sure that many people will find Knightmare enjoyable and probably complete it too. For the most hectic, action-seekers like myself, however, I would suggest that it may not be your cup of tea.

Presentation 81%
Fairly clear instructions, with an original and polished display, and a particularly useful RAMsave option.

Graphics 71%
The sprites lack animation and definition, but the backdrops are atmospheric.

Hookability 47%
Hardened adventurers may find the going straightforward, but occasional explorers are thrown in at the deep end.

Lastability 68%
The large maze and taxing puzzles should keep most players struggling for a while.

Overall 66%
An unusual and interesting idea that suffers from laborious, obscure and unsatisfying gameplay.

An unusual and interesting idea that suffers from laborious, obscure and unsatisfying gameplay.