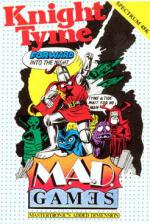 The easiest course is to refer you all back to last months look t the 128 version (back issues available at dirt cheap prices), so I'll just sit around and twiddle my thumbs while you skip through it.

(Rum-te-tum...) Magic Knight stranded in the future on board the Pisces, has to get back to his own time before the forces of law catch up... (La, la, la...) Windimation technique of pull-down menus for commands... magic... take and drop... communicate and special commands... (Just time to make a cup of tea...) Animated central character and a whole host of others once you've got command of the ship and can steer it from planet to planet (Slurrrp!).

Haven't you finished yet. What an incredibly slow reader. Well, I can't wait around all day so see if you can get your literacy skills round this one... IT'S ACE! Big letters, little words. Got that? Good. Then I'll continue...

Obviously sacrifices have had to be made to cram even the most half-cut noble into the half size Speccy. There are fewer screens and the cast has to work harder as David Jones has pared down his original concept. You'll also miss out on that super music that there was originally room for.

So am I saying give this 48K version a miss? No. But I am saying, get jealous of all those who can run the full version. But buy this all the same. Play it. You'll love it. And finally when your standard, unspecial K machine melts down or whatever happens to old Spectrums, and you join the big boys (and girls... of which I'm one!) then it'll only cost you £2.99 to find out what you were missing and your total outlay of under £6 will still be better value than many more expensive programs.

This 48K version has fewer screens and the cast has to work harder as David Jones has pared down his original concept. But that doesn't mean you should give it a miss.