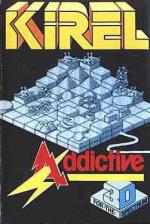 Addictive Games are best known for simulation games such as the monster-selling football Manager, but this new release shows the Bournemouth-based company taking a completely new direction.

Kirel features a cute frog-eyed character who hops around the seventy 3D screens that make up his world in search of bombs to defuse and objects to collect. Kirel can only climb one step at a time on a screen, so he must pick up and drop blocks as he goes along, building staircases and bridges as they are needed. You can only move to the next screen when all the bombs on the current level have been defused.

Each level has to be completed within a certain time-limit the amount of time remaining is indicated by a fuse trailing from the floor, which smoulders quietly away. If Kirel doesn't move fast enough and runs out of time, the little marauding meringue explodes. Contact with patrolling monsters saps energy, and can also lead to death.

Once all the bombs on a screen have been defused by jumping on them, an exit icon shows pointing the way to get onto the next screen. If Kirel leaves the screen inside the time limit the score is increased.

The Bionic Battle Bun, as he is known to his friends in the patisserie business, roams around the screens searching for cakes to eat and arrow blocks to collect. Monsters are allergic to cake and are destroyed if Kirel touches one while he has a cake in his inventory. Arrow blocks give Kirel another section of bridge, while bags of sweeties and sugar replenish his energy levels. Little balls give Kirel more time to complete the current level.

Kirel has four lives per screen, and the status area on the bottom left-hand side of the screen shows the number of lives, cakes and bridge building units he has as well as his energy level.

Other useful items to keep your bulging eyes peeled for are cubes, which destroy immovable walls and pyramids, and transporter networks represented by shimmering curtains or circles, which can be used to move Kirel around the screen.

'Well, well! Addictive have been relative quiet since the golden oldie Football Manager, so it's nice to see them publishing such a fun puzzle game. More or less everything (except sound) has been exploited to the full to bring idea to fruition. The star of the game jerks a little bit, but other things make up for this. Generally the graphics are nicely represented, but the games real high is its playability. I think it is really good, clean, puzzle solving fun. The title screen flickers a lot, but the effect is there, and it works quite well. Addictive and fun to play. Not worthy of a Smash, but well worth a good few day's attention'

'Kirel is definitely one of the most original games ideas around on the Spectrum at the moment, and contains some excellent 3D graphics. At first the gameplay is very slow, but I found it was relatively easy to get used to and suited the cute little character you control. The time bomb time limit is a very effective idea and makes you hurry around with more urgency than a counter would encourage. The graphics are set in great 3D perspective, although some situations seemed a little awkward to work out on the later levels. The other characters are well drawn and the baddies smoothly animated. The only thing I missed was a little tune to listen to, but that hardly counts against the game. Kirel is a brilliant game which anyone can get straight into playing. Definitely worth buying if you want something that is a little different from the 'run of the mill' Spectrum software'

'I was initially very impressed, but after a few goes the novelty of the pretty graphics wore off and I was left with a fairly mediocre 'jumping around collecting things' game. The graphics are very good and the characters are well drawn, although a little jerky when they move. The sound is limited but adequate I suppose. Controlling your blob or whatever it is, is difficult at first but after a few practice games it becomes second nature. It took me a long time to get into, but once you got on with it, I found it fairly playable and addictive, although it isn't the sort of game I'd get hooked on. Not a bad game - it'll take a lot of determination to complete.'

Not a bad game - it'll take a lot of determination to complete.