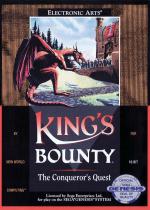 King Maximus was a lovely chap. He travelled the land doing good deeds, helping the needy and feeding the hungry. He trotted about on the Royal Pony dispensing righteous justice with his Sceptre of Order. Meanwhile, Arech Dragonbreath, hating the twee nature of the softy, goodie-two-shoes ruler and his kingdom, decided to invade and lay waste to the four continents with his Dark Legions. To throw the land into chaos and weaken Maximus' forces. Arech has stolen the Sceptre of Order and the armies of good will not be able to repel the invaders unless it is recovered.

King's Bounty is a cross between a RPG and a strategy game. You can play as one of four characters, each of which have their own strengths and weaknesses. Once chosen, the character recruits his own group of soldiers and treks across the landscape searching for treasure, artifacts and foes to chop up. Killing monsters earns the character a bounty which pays for siege equipment, spells, information and extra troops.

Ships are the army's standard mode of transport, and as the party sails around the continents promotions and extra troops help to bolster its strength. However, to find the sceptre, it's essential to find the map which shows its location. Unfortunately the map is broken up and scattered around the landscape, and finding those pieces is a quest in itself!

The array of spells can be daunting at first, but the magic system is easy to get used to. Most spells can be bought or found, and if a certain spell doesn't seem to be around it probably isn't needed on that continent.

Some spells are only available during combat, while others come into force while exploring or in a town. Instant Army is a fun spell for increasing the friendly forces before a battle, while Bridge helps to get across a river or stream.

The four choices of character vary dramatically in their particular abilities. Here's a look at them:

1. Lord Palmer This paladin is good at magic and has strong troops. He is not as powerful in combat situations as the knight though.

2. Sir Crimsaun He's a knight, and is therefore good at leading troops into battle. He also gets lots of money every week. However, his magic is not that powerful.

3. Mad Moham Moham the barbarian is easily the best fighter in combat, and has excellent troops to begin the game. However, his magic is so bad he has to be taught spells before he can use them.

4. Tynnestra This sorceress is rubbish at leading her troops, but a whizz with magic. Don't expect to win battles by brute force.

The combat screen shows both friendly and enemy units. Each friendly unit receives an order to move and/or fight every turn, the limitations of which vary according to the type of unit. Sprites, for example, can fly to any part of the screen, and archers aren't limited to attacking the adjacent square the way that other units are.

Stats for every unit can be checked from the commander's menu - remember, it isn't a good idea to send peasants up against ogres...

I thought this was going to be an average RPG, but in fact it's not at all bad. I especially like the straightforward combat system, and though the graphics are hardly likely to win any awards, they do convey all the information.

I'm not sure that this will sell too well (considering the hefty price tag), but I like it anyway. The only thing you should watch out for is the compatibility problem with Japanese Megadrives, so think twice before buying if you don't own an official machine.

Not being particularly interested in RPG's, a game of this sort has to be pretty amazing to get me playing. Sword Of Vemillion managed to do it last month, but unfortunately this one failed to grab my enthusiasm.

It's quite good fun, but neither the graphics nor the sound provide any sort of atmosphere and the gameplay simply isn't addictive enough to appeal to anyone other than ardent RPG fans.

Presentation 78%
Crude but effective screens lead the player through the game, and the manual is laid out informatively.

Graphics 74%
The graphics aren't too attractive, but they never obscure the task in hand.

Sound 67%
An annoying tune plays throughout, and the sound effects are pretty limited.

Playability 82%
An annoying tune plays throughout, and the sound effects are pretty limited.

Lastability 80%
It will take many days of playing to complete this, and then there are the other characters to play with.

Overall 80%
An RPG which is long on gameplay, but short on decent graphics and sound. Try it out if you're an RPG fan.

An RPG which is long on gameplay, but short on decent graphics and sound. Try it out if you're an RPG fan.