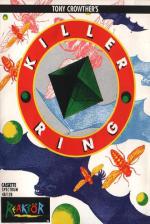 We all know what Killer Rings are - large fried doughnuts in space, genet ally attacked by a menagerie of toads, bunny heads, flop-eared whatchamacallits, and orbs. Some of these approach in a series of attack waves from the top of the screen, whilst others move in an unpredictable fashion from any screen direction. Others, if they pass off the screen, scroll once more into view from the other side.

The killer ring has three lives, lost on contact with another occupant of the screen, or the pulses that they fire. All the attackers can be destroyed, though they require sustained hits, and their death throes award you points, with bonuses added when sufficient numbers have been destroyed.

When the required number of attack waves has been destroyed the killer ring is confronted by a spaceman sifting in a hovering craft. The defensive underbelly of the ship can be blasted through and the spaceman killed. With this done, the killer ring returns to take on the first attacking wave once more.

For added difficulty, the vertically scrolling antimatter beam can be activated, which nullifies the killer ring's initial blast, and must be pierced before the blaster can reach its targets.

'Oh wow! A updated version of the original Space Invaders game. Shoot-'em-up games have always been a favourite of mine, but I can't say this had very much appeal. The alien's are a bit nastier and the sound is very much improved, but that's about all. Amazingly, though, it still has loads of addictiveness, and gave me lots of hours of fun, but I think the thrill of this type of game has become a little cob-webbed.'

'Killer Ring is really just a glorified Space Invaders game, with a Phoenix style bit thrown in. The graphics are quite well defined but when a huddle of monsters stay in one place it's hard to pick them out. The colour is monochromatic but it has a mufti-coloured title screen. The best element is the sound by WE M.U.S.I.C. -it's fantastic. This game would be more suited to a budget price, but it isn't that bad.'

'Although there have been some changes since we were last there, the aliens have got meaner and bullets have become a newfangled laser, it's immediately obvious where Killer Ring's roots are firmly planted. I liked the improvements over the old style Invaders, especially the music, and Killer Ring can be very addictive if you've got a worthy competitor to hi-score against.'

I liked the improvements over the old style Invaders, especially the music, and Killer Ring can be very addictive if you've got a worthy competitor to hi-score against.