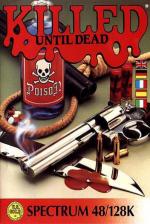 'Bonjour Monsier Slammair! I 'ave to tell you zat I am suspecting you of attempting to murder ze tres belle Mademoiselle Claudia on ze patio avec le bombe surprise.

"Eau neau, a revolvair is being pointed at moi through le fenestre! I am being shert! Ma foi, I am daid! I lay down! Now ze murderair will be able to perform ze fould deed wiz impunity .

Anyway, the basic plot is simple: you are Hercule Holmes and you know that a murder is going top be committed tonight. Both the victim and the murderer are members of a world famous crime writers association, the Murder Club, you have to identify murderer, victim, location and method and stop the devilish affair be- fore it happens.

It's very reminiscent of that old favourite, Cluedo, except that instead of challenging other players to tell you if they have or haven't got a particular card, you try to weasel useful information out of the five suspects. They will tell you things like; 'If Claudia is the killer, then it won't be with the bomb', or 'if the victim is Sydney, the method won't be poison' After you've collected a whole slew of these, you can start eliminating certain combinations, until you've reached the point where you think you know the answer.

At that point you challenge the killer, reveal your guess, and if you're right you win, if you're not you get shot by a mysterious figure at the window.

At the start of the game, you access your files and read the profiles of the five potential murderers/murderesses. All should be familiar to anyone with even the slightest grounding in detective fiction (and you'll need to know something about the genre). There's the Agatha Christie old woman sleuth, the vamp (rather daringly called Claudia von Bulow - very similar to the name of a certain gentleman acquitted of attempting to murder his wife not so long ago), Lord Peter Flimsey, Mike Slammer and Sidney Meanstreet. They all have their own pictures as well.

To help you in your quest to get the necessary proof, you have a number of useful gadgets on your desk top, and can perform various actions.

Then you try to get further information by searching their rooms. To get into each room, you have to be able to answer a murder trivia question, like 'Who was Mike Hammer's partner?'. It's not as difficult as it sounds, as the questions have multiple-choice answers and if you don't get it right this time, you can always come back later and try again, although you lose time (you have only 12 game hours).

Once you're in a suspect's room, you find various interesting things, which you make notes of. Later, you can ring up that particular suspect and let slip that you know something about him or her that you shouldn't. Get the right button, as it were, and they say 'have you been spying on me?', which shows immense perspicacity.

Their eyes get big, and they look very nervous, and you can start pumping them about the case. You do this by a menu-driven system, so you can cover the whole spectrum of who, where, and with what, although they'll clam up after a while and you'll have to try something else.

The whole thing actually works pretty well, considering the limitations that the game structure imposes. The windowing helps you stop you getting too bored from sitting at your desk all the time - you get to see the people you're talking to by phone. The great thing is when you show you know all about them - their eyes pop and they start waving their hands about. Claudia even starts looking green, before she disappears off-screen to throw up. Sidney's cigar moves around his face, like some sort of signalling device - all very amusing the first few times at least.

There are four difficulty levels, and seven different scenarious to choose from, which makes at least 28 different plots to sort out. Actually, it looks like there are far more than that, if what US Gold tells me is kosher - who, where and with what are chosen randomly each time, so that means there should be seven factorial times four factorial take away the number you first thought of and add the ABC figure which means a lot.

A very big figure. And that's a close as I can get.

So at £8.99, well worth loading up - amusing graphics supported by some logic problems that should push you to the time limit with ease, plus extra mystery trivia for the murder buffs.