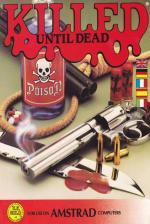 As Hercule Holmes, you must stop a murder which is due to occur at midnight. The victim, murderer, weapon, location and motive of the murder are unknown. You must solve this mystery before the evil deed is done.

The scene of the crime is the Gargoyle Hotel where the world's five leading mystery authors, known as the Midnight Minder Club, are holding a festival of murder and mayhem.

Murders are graded in four levels of difficulty, "Elementary, my dear Watson", "Murder Medium Rare", "Cases for the Cunning" and "Super Sleuth". When you have chosen the difficulty, you are given a choice of several crimes to choose from. In all there are twenty-one crimes to choose from, split over the four levels. Once a crime is chosen, the main game loads and the clock starts at noon on the day of the murder, giving you twelve hours to solve the crime.

Surveillance is sub-divided into monitor, break-in and tape. The monitor is a camera system which allows you to spy on the various parts of the hotel and store the information in your notes. Break-in uses a mystery trivia quiz to decide if you can break-in to an author's room or not. If you succeed, you'll find out what people keep in their rooms. This information is also stored in your notes and gives insight into the authors weak spots. Tape allows you to record conversations in up to three rooms, and store them in your notes.

Incoming calls and outgoing calls are possible on the telephone. Incoming are either anonymous or from one of the authors. Outgoing are only to the authors. When you call the authors for the first time, a list of four things to say appears on screen. You must select one of these, which is where the break-in notes come in handy. If it is incorrect then they hang-up, but if you are right then you can ask them some questions about the crime, in traditional Cluedo style. Every time you ask a question which is connected to the crime, the author's picture on the screen gets a little more flustered and edgy. Three correct questions in a row gives a positive piece of evidence and a complete nervous wreck on the screen.

When you think you know everything about the crime you can phone the killer and confront him or her. If you have identified the victim, location, killer and weapon then you must specify the motive of the murder. It you're correct on all counts then the crime has been stopped and you can get a full explanation of the story behind it. If you're wrong then you become a victim and are killed.

Sound is used to good effect; each author has a tune associated with them. Colour is used well throughout the game and the animation of the authors is extremely funny.

The main problem with the game is that you can often just guess your way through the crimes without actually knowing all the evidence. You can play it properly though and then solving a crime gives you a good deal of satisfaction.

It's not often that computer games get me laughing out loud, but Killed Until Dead has succeeded. The animated pictures of the authors are marvellous, and some of the text descriptions are pretty special as well. The fact that there is usually a short cut to solving each crime is disappointing, but if you stick to the rules it's a lot of fun.

No problems for the great detective in green.

Graphics 87%
P. Great animation.
P. When you get three questions in a row the effect is hilarious.

Sonics 72%
P. Each character has their own tune.
N. The tunes are not brilliant.

Grab Factor 83%
P. Well presented and easy to get into.
N. Solving a crime is tricky.

Staying Power 78%
P. 21 crimes will keep you burning the midnight oil.
N. Each crime is solved in a very similar way.

Overall 80%
P. A novel and humorous game, with something new to offer.

The fact that there is usually a short cut to solving each crime is disappointing, but if you stick to the rules it's a lot of fun.