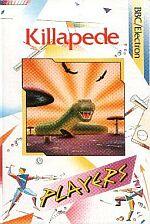 Emerging fortuitously into the BBC budget market just as Mastertronic have deserted it, Players are offering simple value-for-money budget titles.

This is, naturally enough, a version of that old classic Centipede. Nothing to get too excited about, but as a pocket money game it is very acceptable. The graphics aren't wonderful, the game concept is rather old hat, but it is a classic game.

If you haven't got a version of Centipede in your collection, then this will do nicely. Just approach it in the spirit in which it's been released and don't expect a full-price game for a budget price.

Players have a rolling programme of releases across a number of machines and specific machine support depends totally on sales. They have some interesting sounding BBC releases ready to present to you - it all depends on how many copies of Killapede you buy!

The Electron version, incidentally, is more impressive than the BBC one - faster for once! This is interesting in a market that is, apparently, selling more Electron games than BBC ones. No, I can't explain that either but at least I'm happy that the budget end of the Acorn market is not being ignored in this age of mega-releases.

The Electron version is more impressive than the BBC one - faster for once!