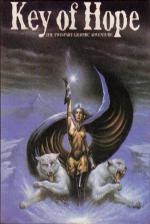 Tower Of Despair, which was Games Workshop's previous "Quilled" adventure, and by all accounts was a goodie. Key Of Hope is the sequel and, I suspect, will be equally well received by the adventuring community.

It's a two part adventure though, to be honest, I haven't got very far in the first part as the problems I've faced aren't easily solved. But they are enticing enough to ensure that I'll be going back to the game to try and get through.

The adventure is very well constructed, and has the wonderfully frustrating habit of dangling things right before your eyes, but just out of reach. I suspect that when I do stumble across the answers I'm looking for, they'll be so obvious I'll kick myself for not guessing them sooner.

The plot is the old 'find the parts of a treasure' chestnut, but the actual design of the game is excellent. The authors have redesigned the character set into a nice medieval script, which suits the mood of the game. The location descriptions are very good, and the addition of graphics, courtesy I assume of The Illustrator, has not detracted from this.

Obviously, these graphics occupy a fair chunk of memory, but the authors have chosen to stick to a basically text only approach, with just a small number of illustrations for the most important locations and objects, and I think they have just about got the right balance between text and graphics.

My only, minor, criticism of the game is that it suffers a little too much from the 'you are on a grassy plain that stretches as far as the eye can see' syndrome, which makes mapping a bit long-winded.

Apart from that, it makes excellent use of The Quill and Illustrator (the first commercial product that I've seen using The Illustrator, by the way), and sets a high standard for other "Quilled" games to achieve.

Sets a high standard for other Quilled games to achieve.
Logout