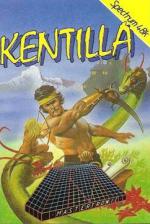 One of the nice things about budget software is that it gives you the chance to catch up on some full price games of yesteryear that, for some reason or other, you missed at the time. One such title is Kentilla, a little gem of an adventure that has just been re-released.

On the face of it, the game does not appear to be anything special. There is the usual sort of quest of defeating the evil Grako with the magic sword Kentilla, but believe me, it is a quest that will take some attaining. To start with, you are given very little information about your task, but must find out as you go along. You will also need to backtrack considerably, re-visiting previously explored locations.

Another feature of the game is that you will need to talk to a lot of characters. If they are friendly, they will help you wherever possible. If not, well, it depends how they feel. The characters are many and varied. Urga-mauls are nasty in the extreme and the rattling quarg also seems to attack you wthout provocation although you should get considerably more joy out of the family of cavezats. These cavezats are a right homely bunch with descriptions such as fat, ugly, chief, thin and small. There is seemingly very little lying around and everything must be examined carefully.

There are some small illustrations to accompany certain locations and location descriptions are by and large sparse but, for all that, the game evokes considerably atmosphere. And at only £1.99, Kentilla has got to be one of the adventure bargains of the year.

There are some small illustrations to accompany certain locations... The game evokes considerably atmosphere.