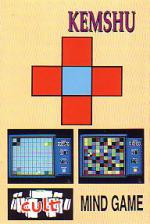 Normally when people claim that a game is very simple but maddeningly addictive, my response is that they must have been mad in the first place. But in the case of Kemshu, it's true! Nothing could be more simple, but nothing is more likely to reduce you to a driveling nervous wreck in record time.

It like this. You remember the Rubik Cube, the plastic square from Hell? Kemshu works on a similar principle, but it's in two dimensions. The screen shows a grid of 100 coloured squares, and at the right hand side is a timer, a score indicator and a percentage remaining display. Percentage of what, you wisely ask.

For each level you have a target colour (shown at the bottom right). Your task is to surround squares of that colour with squares of any other colour. The target square then changes colour, and you move on to the next target.

To move the squares you control a flashing cursor using keyboard or joystick. When you have the cursor positioned, press the fire button and move the joystick, and the entire row or column of squares will jump along. Say your target colour is red; once you have placed a black square at the top, bottom left and right of it, it will change colour to black, and you can go on the chase the next red square.

The similarity to Rubik's Cube, of course, is that any change you make affects not only the one row or column, but and number of other rows or columns; the trick is to plan ahead, shuffling the colours you want into position to zap the next target. A useful technique I figured out is to gather as many squares as you can in the middle of the screen, then move the target colours into the centre: this seems to be quicker than trying to surround the target squares wherever they lie.

You don't have to surround the squares' diagonal edges, but you can't surround a square which is at the edge of the screen (not even by placing a colour square on the opposite side) - you have to move it away from the edge.

There's only one problem with Kemshu - it wouldn't let me win. Every time I got the counter down to 3% remaining, it would announce that I had run out of time, wish me a nice day and go back to the start. Maybe it's just my copy which is wonky - the screenshots on the sleeve show later levels - but it would be a bit of a bottomer if you sploshed down your hard-earned wonga for a game you couldn't even beat.

Fascinating mind-game with a twist. Not that great to look at, but great fun.

Fascinating mind-game with a twist. Not that great to look at, but great fun.