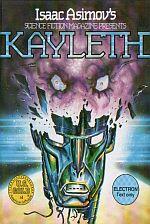 You are a programmable droid with a program. Your aim in life is to kill Kayleth, in this sci-fi story written by Steve "Rebel Planet" Ufnowski.

A dramatic loading screen leads into the story which puts you on board a factory ship that produces androids. You find yourself strapped by metal bands to a conveyor belt, moving slowly but surely towards a pair of electrified robotic claws!

The graphics in this adventure are animated and the claws look terrifying as they open and close as you move steadily towards them.

You have a limited number of moves to escape - only to be pursued by a destroyer droid, whose intentions are deadly!

After a bit of quick thinking, and much searching, you may have in your possession as many as four objects, and be confined to an area of eight locations. Now the fun really starts!

What can you do with a fuse, some gloves, a length of sticky tape, and a sealed, welded cannister? By the time you have that one worked out, chances are your SAVE tape will be worn through!

Eventually, by the - careful - use of an AZAP chamber, you find you can leave the ship and set foot on Zymoria. Making your way to the city of Zymogg, the game starts to open up, with many places to explore, and the dreaded Ufnowski humour to put up with!

On the bar of the Oblivion Inn, for example, sits a tray of Onuts - a tempting appetiser if ever there was one! Onuts, in case you didn't know, are a kind of high-breed peanut, and breath freshener! Take them, and the temptation to do a runner with the empty tray, is overwhelming!

Up to the crater, and down to the beach, and by now you've probably gathered a capacity load of attractive objects destined to make you drop the very mundane one you've been carting around for far too long. And you've guessed it - that is the object that is about to become the key to further progress!

If that isn't enough to make you give up in despair, it won't be long before you come across a locked door. "Didn't you ask XXXXX for the key?" questions Ufnowski innocently when you try to open it!

Needless to say, XXXXX was keeping very quiet about the key when you last saw him, some two dozen locations and fifteen problems ago!

There are lots of things to uncover in Kayleth. Examine is a very useful command, and well handled. It reveals not only essential objects, but clues critical to the solving of many of the problems.

Even then, they're no give-away - the reply to Examine often gives you a few things to chew over, so as to be able to arrive at the answer yourself.

Other replies are helpful too. "You don't need to do that" saves you a lot of unnecessary heartache. "Please try varying that verb," means you can't use it in conjunction with that noun, or perhaps you've mis-spelt it. I won't comment on the cheeky "Maybe later, maybe not!" message!

Input is multi-word, and a GET ALL command is finger-saving. But the parser isn't as complex as you'll find in an Infocom of Scrolls game. GET ALL EXCEPT DEXTA proves blind to the EXCEPTion, and without warning, you will have picked up the lot.

The graphics, which were also created by Steve, are superb. Many of the pictures are cleverly animated in a way that you'll not have seen on a cassette-based adventure before.

It's a pity there's no RAM save, but with all those graphics in memory, I could hardly complain that there was not enough room left in the 48K Speccy, which I used to play the game.

I hate brilliant adventures! I keep playing and playing, instead of writing about them, and I get black looks from Overseer Metcalfe.

Kayleth is brilliant - it's one of those adventures which need careful thought to sort out the puzzles. Play it, and every now and again you'll get furious with Steve Ufnowski. And you can be quite certain that he's sitting back somewhere, knowing exactly what you're up to, and laughing like a drain into his computer!

Kayleth is brilliant - it's one of those adventures which need careful thought to sort out the puzzles.